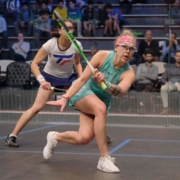 It’s the 100th day of lockdown when we speak to squash player Lisa Aitken who’s been back at her family home in Montrose ever since winning a fourth national title in March.

For many, this time has allowed an opportunity for reflection – something Lisa’s well accustomed to doing having spent the best part of three years off the PSA Tour after contracting dengue fever competing in Malaysia in 2014.

The death of black man George Floyd on May 25 in Minneapolis, Minnesota, has emboldened a global movement demanding action and change when it comes to racism, inequality and a lack of diversity in society.

Of course we’ve been here before but this time it feels different as people have been afforded time in lockdown to really sit up, take notice and reflect on societal racism which is sadly still alive and well.

If you follow Lisa, Scotland’s number one female squash player, on Instagram you will have noticed her efforts at raising awareness of issues around racism.

These efforts have not been tokenistic gestures, acts of white-guilt posturing or grandstanding.

They’ve simply been the actions of a normal woman from Montrose, who happens to be good at squash, wanting to educate herself and asking others to do likewise.

“Everyone in the whole world has become more aware of racism during this period,” she says.

“That’s fantastic but we need to learn far more about it and it needs to be spoken about more.

“I’m anti-racist which is all very well me saying but what I’ve realised is – that’s not enough.

“I need to educate myself a lot more so I can understand more.

“It’s something moving forward I won’t be scared to speak about, particularly with my friends who are black.

“I want to know how they feel and they want to be asked questions and speak about it. By not speaking about it makes it a taboo subject and that’s taking a step backwards.”

She continued: “With things that I post on social media, I want people to know what I think and potentially have an influence on how they think.

“Posting an image on Instagram is all well and good but I’m like ‘here’s a link, click on it, read this article, watch this TedTalk, documentary or film.

“Even if just 2 people of my 2,000-odd followers click the link and do any of these things then that’s progress, educating and raising awareness.”

So what about racism in the sport she plays professionally and loves.

Black squash player, French Guianese ace Melissa Alves, recently spoke movingly about her experiences of societal attitudes to race and colour but says, “the PSA Tour is the most welcoming and inclusive place to play your sport and everyone is treated the same no matter the colour of their skin.”

She points to the great players from Asia and the fact the women’s rankings are dominated by players with brown skin from Egypt. She would, however, like to see more black players competing.

Lisa agrees saying: “I’m proud of my sport and there’s no evidence of racism on the PSA Tour.

“But it has got me thinking – why do we not have more black players in the squash community?

“That for me is an issue and it’s still predominantly a white-orientated sport and we need to become more diverse.”

The 30-year-old highlights issues of perception having been struck by a conversation she had with her girlfriend Rachel Corsie who captains the Scotland national football team and plays for Utah Royals in the USA’s National Women’s Soccer League.

She added: “Rachel said to me, ‘it’s a white-privileged sport that rich middle-aged men go and play after work and then sit in a sauna.’

“That’s someone’s overview of squash looking totally from the outside. When she thinks of squash that’s what she thinks.

“The demographic which played back in the day was a lot like that but it has changed.

“Maybe because squash is not an Olympic sport, not in the face of the general public as much, means it still carries that stigma unfortunately.

“Our sport needs to be more attractive to every race and a way to help do that is to change the stereotype, stigma and perceptions that are associated with the name squash.”

Lisa has been doing the 30-Day Allyship Challenge which aims to provide direction for people looking to self-educate & take action in support of the black community. For more details, click here.

Scottish Squash are finalising an Equality Action Plan (2020-2023) which will be published soon. For more information on this and other queries about what Scottish Squash are doing regarding Equality, Diversity and Inclusion, please email: David.Fallon@scottishsquash.org