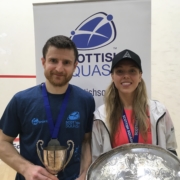 For Alan, it was a remarkable 10th title overall and seventh in a row whilst Lisa claimed her fourth title and third in succession.

Her experience and consistency then proved too much for Georgia in the gold medal match and whilst the second seed began brightly, Lisa pulled away in the last two games to secure victory 11-5, 11-3, 11-3

For Aitken, this fourth national title was 10 years since first lifting the trophy back in 2010

She said: “Georgia and I are good friends and it’s never easy playing a friend.

“But when it comes to the Nationals everyone is gunning for that title and to be the best in their country.

“I prepared myself for a tough battle because Georgia is continually improving and is fiesty and athletic.

“I had a game plan and knew if I could keep in control of that and myself then I would have a good chance of winning.”

She continued: “I enjoyed the weekend and was fortunate to have my mum and dad here watching and my brother on Saturday.

“I play abroad a lot and they are normally just watching an online stream or watching numbers changing on a live scoreboard which can be very stressful for them.

“So it’s nice to have them here and go through the emotions with me.”

Being able to spend time with some of Scotland’s top juniors is part of the reason Lisa enjoys competing at the Nationals.

The 30-year-old was also thrilled to see two-time national champion Claire Gadsby on court competing after a frustrating number of years out the sport due to serious knee injuries.

It’s early days in Claire’s comeback trail but she received a big boost by emerging victorious at a recent women’s Senior Gold event at Scotstoun.

“Seeing Claire out competing has been one of the highlights of my weekend,” Aitken said.

“She’s had a lot of time off but how she played this weekend and Claire’s fighting attitude in matches shows the tenacity is still there.

“She certainly would be a real asset to the Scotland squad and isn’t far away already from being at that level again.

“Overall the weekend has been great and I’ve made sure to be visible and chat to the other girls in the draw and give advice to the juniors who have maybe found the task of playing in the seniors a bit dawning.

“That’s why I always look forward to this weekend, I get to see all the other players who are training hard across Scotland.”

With Greg Lobban a late withdrawal from the men’s draw, Alan Clyne was promoted to top seed at this year’s Sterling Trucks Scottish National Championships.

Clyne was at his ruthless best, not dropping a game throughout the tournament as he continued his stronghold on the men’s event.

“I started off very well which was crucial but he didn’t give up and he was testing me in the long rallies because he’s tricky to read.

“It was an entertaining match and I can’t ask for more than a 3-0 win. I love playing the Nationals and always seem to perform at my best.

“I’m proud with 10 in a row and would never have thought about that number when I first started playing squash. I’ll appreciate the achievement even more when I retire.”

He continued: “I really enjoyed the weekend, there’s been some quality matches all the way through.

Thanks once again to Sterling Trucks for supporting the Scottish National Championships.