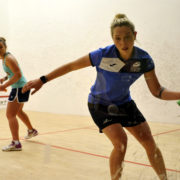 In August 2014, whilst competing at an event in Malaysia, she was diagnosed with dengue fever, a mosquito-borne tropical disease.

The illness then had a knock on affect and Aitken only returned to competitive action in January this year at the Edinburgh Open.

She narrowly missed out on an elusive first PSA world tour title in Jersey last month showing that the form which took her to number 38 in the world was coming back.

Last weekend at the Fitzherbert Rowe Lawyers New Zealand International Classic in Palmerston North she beat three seeded players, including top seed Amanda Landers-Murphy, on her way to the final.

“What a feeling when I won, it has been a really tough few years,” Aitken said.

“At times I never knew if I would ever get back playing in these competitions given the illness that I had to face up to and the fatigue which made things difficult for me.

“Through the whole time out of the game it was my family who stood by me and gave me all the support I needed and this victory is 100% for them.

“My parents and others around me never rushed me back to squash or told me to do things this way or that way they were just there giving me help and encouragement and it means a lot.

“I was pretty emotional when I started training at a good level again, but this trophy win is even more emotional and it shows me that I deserve to be in this company.

“One thing I certainly never lost was my desire to be the best and to push myself as hard as I can.”

Aitken admits that while the final against a home favourite was tough, she felt that once she came through two very long matches in the quarters and the semis that she could cope with anything that was thrown at her.

The 27-year-old continued: “In the last eight my match was just under an hour long and then in the last four it was a bit of an epic against Andrea Lee and we really slogged out some points.

“However, I got through it and that gave me a lot of confidence going into the final.

“Now I just want to get more matches under my belt and kick on from here.”

– On Sunday, June 25 between midday and 4pm an East Squash Open fun day is being held at the Grange Club in Edinburgh for girls interested in taking up the sport. For more details, click here