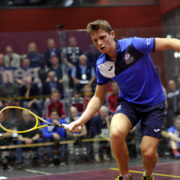 Scotland’s number two male squash player Greg Lobban has admitted his comeback to the PSA tour could not have gone any better after he added the Fitzherbert Rowe Lawyers New Zealand International Classic title to his CV.

In October 2016 Greg suffered a hamstring injury when he was on the cusp of victory against New Zealand’s Campbell Grayson in the final of the Life Time Chicago Open.

He battled on, but eventually lost and only recently came back to full fitness and competitive action.

Last month he won the Vitesse Stortford Classic in England and at the weekend he lifted the Fitzherbert Rowe Lawyers New Zealand International Classic trophy in Palmerston North for back-to-back titles.

Lobban – who did not drop a game throughout the entire tournament – claimed the first game 11/8, before going onto secure the next two to win 3-0.

“Going into this event I was feeling good because I feel like my comeback to playing at this high level has gone well,” the 24-year-old said.

“Over the period I was out I worked hard with the physios and other medics to make sure that I would not rush things and it feels good now.

“There was a pretty good field in this event, but I knew that I had it in me to get to the final and that was my aim at the start of the week. I then managed to play some good stuff in the final.”

The North Kessock player is currently playing in the Ilt-Community Trust NZ Southern Invercargill Open in New Zealand before a busy schedule back in the UK.

He explained: “Over the summer back home we will be cracking on with doubles events and it really gets pretty busy in the coming months because then I will be defending the World Doubles crown with Alan Clyne in August.

“I am happy that the action is coming thick and fast though having been out for quite a long period of time.”

Lobban was not the only Scottish winner in Palmerston North, Lisa Aitken picking up her first ever PSA title. We’ll be posting an interview with Lisa on the website soon.

On Lisa’s win, Lobban said: “Lisa did really well and I know how hard she has worked to get back to this point after illness and some time out. It is great to see her back.”

On Sunday, June 25 between midday and 4pm an East Squash Open fun day is being held at the Grange Club in Edinburgh for girls interested in taking up the sport. For more details, click here

Lisa Aitken caps off remarkable comeback with maiden PSA world tour title.
Scroll to top
This website uses cookies to improve your experience. We'll assume you're ok with this, but you can opt-out if you wish.Accept Reject Read More
Privacy & Cookies Policy