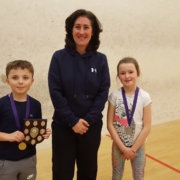 As a player Jane Martin was one of the best, reaching a career high world ranking of eight back in the 1990s.

A born and bred Geordie with working class roots, Jane represented England at numerous levels competing at Commonwealth Games, Worlds Cups and World Team Championships whilst reaching the latter stages of the most high profile individual events on tour.

Her first professional playing contract was signed when she was just 16-years-old when she caught the eye of a club in Gütersloh, Germany. She ended up playing league matches for the club up until her career was cut-short by injury as she was turning 30.

By then Jane had an eye on a coaching career which now spans 18 years – the majority of which has been spent at Bridge of Allan Sports Club (BoA) where she’s head coach.

Naturally she is able to call upon her extensive experiences as a world class player.

Yet she describes herself as “working class through and through” and it’s this grounded upbringing which serves Jane best, shaping her into the popular and successful coach she is today.

“I remain me,” the understated 48-year-old says when discussing her holistic style of coaching. The focus is on the person first, player second.

“When coaching kids, yes I have a professional approach to sessions. But at the end of the day, they can talk to me like a friend.

“I don’t communicate like I’m above them. It’s about having respect, respect for the kids and parents I work with and gaining their trust.

“It works both ways and thankfully I get that back from them. I’m very lucky.

“For me it always goes back to listening to the individual and what the individual wants. Not everyone wants to be the best squash player in the world and there’s a lot of pressure put on kids these days. I’ve seen it so often, especially in other sports and that’s without the additional pressures of school and just growing up and maturing.

“I can spot if someone is a special talent and I might give them an extra steer, challenge them in different ways. But I never talk along the lines of becoming a professional. I want things to be enjoyable and fun. That’s what will ultimately keep them coming back to the sport.”

Jane continues: “Keeping squash alive at grassroots level is huge for me. To do that, things need to be light-hearted and fun.

“If you push too much from an early age it will put them off the sport and you won’t get the best out of them.

“The rewards I get at Bridge of Allan are seeing my tots grow into adults and seeing how far they have come as a person.

“I want kids to grow up and learn good life skills through playing squash.

“They can use the sport as a platform to make friends, socialise and stay fit. That’s why focusing on fun, enjoyment and respecting them from an early age is so important for me.”

It’s a coaching philosophy which has served her well and it’s no surprise that many of the players she previously worked with continue to drop into the club just to say hello.

That gives her great satisfaction but it would be remise not to mention the calibre of player she has produced over the years thanks to her coaching style. The current crop include Rowan Niven, Anna Halliday, Kyle Penman, Lucy Murchie, Oliver Hunter and Jamie Cargill – who are all part of the Scottish Squash Junior Excellence Programme.

And her ‘friend first, coach second,’ philosophy has never been more important than during this extended spell off court.

She added: “It has been a tough time mentally for all of us and if squash had been taken away from me when I was 14 or 15 I would really have struggled.

“So I need to understand how the kids are feeling and just be there to listen, whilst making sure they remain active and have a base fitness.

“I think in all sports there’s a worry that youngsters won’t return. But from those I’ve spoken to they are still super-keen and itching to get back on court.”