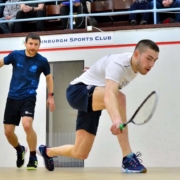 Rory Stewart is determined to replicate his Scotland form on the PSA Tour when the new season begins.

For many athletes pulling on the nation jersey is a source of inspiration and it certainly brings the best out of Scotland’s number three male squash player.

Last May Rory produced some brilliant squash to help Scotland win a bronze medal at the European Team Championships.

He fed off that energy just a week later picking up a PSA title in Argentina before claiming some notable scalps back in a Scotland jersey at December’s Men’s World Team Championships.

The 24-year admits he saves his best performances for Scotland duty and is desperate to translate that into more consistent performances on tour.

He said: “When playing for Scotland you have the support of your teammates behind court and I can feed off that passion.

“I then go from the highs of playing in a Scotland jersey to playing for myself and can’t replicate these performances enough.

“Over the course of last season I had some good results but wasn’t as consistent as I wanted to be.

“That’s something I’ve tried to analyse and work out if there’s a reason behind it.”

He continued: “I’ve been working with Mary McClung (Performance Lifestyle coach) since May this year and aim to put strategies in place before and during matches to keep that focus and intensity.

“Paul Bell (Scottish Squash Director of Squash) and I know the level of squash I can play at and it’s about bringing that into all the matches.

Earlier this month Rory made a welcome return to court at Oriam, the home of Scottish Squash, in Edinburgh for the first time since lockdown began in March.

He’s been able to train with housemate and fellow squash professional Fergus Richards and has been pleasantly surprised with how he’s felt after nearly five months away from court.

“It’s the longest I’ve not been on court since I first started playing so I wasn’t sure how far off the mark I would be,” he said.

“But I felt pretty good and it helps being able to practice with Fergus.

“One thing that lockdown has taught us is to have a bit of patience.

“We’ve just been playing down the one side which is easier on the body and we know where the balls are going.

“So we’ve not been opening up the entire court, just building things up before we’re ready to play some practice games.”

He added: “I spent lockdown back in Crieff and fortunately we’ve got some country roads where I could go out running and I invested in a spin bike as well.

“It was all about building up my fitness but it’s great returning to Oriam and the motivation is definitely back.”