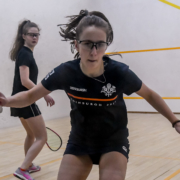 Scotland’s top female junior squash player Lucy Murchie says consistency will be key as she aims to make her mark against the seniors next season.

The five-time junior national champion is continuing her off-court fitness drive ahead of a return to action in the near future.

She picked up the GU17 and GU19 national titles in February having the week before produced a fine performance against then world ranked 100 Dutch ace Sanne Veldkamp at the Edinburgh Sports Club Open, losing narrowly 4-11, 11-9, 7-11, 9-11.

The results proved she’s got the potential to match-up against the professionals next season as she continues to improve her game.

The 17-year-old said: “I was pleased with how I was playing in the first few months of the year and hopefully I can get more opportunities against the senior players next season.

“I was able to up my game to the intensity of the professionals and it’s now all about maintaining these standards through an entire match.

“The more matches and practice I get against that quality of player the better for me.

“Obviously they are playing on the PSA Tour and are stronger and fitter.

“With that comes a level of consistency which, as a junior, you are aiming for as you get older and more experienced.”

Over the last few months she’s kept in close contact with her coach Jane Martin and taken part in virtual training sessions via Zoom, led mainly by Scotland’s number one player Lisa Aitken.

The Crieff youngster has also incorporated CrossFit into her off-court training regime as well as high-intensity circuit training.

She continued: “I’ve been trying to keep as fit as I can during the time away from court and CrossFit is something new for me which I’ve found is good fun.

“Keeping connected and doing work-outs with the Ladies Senior Academy players through Zoom has been great as well and hard work.

“It’s been March since I was last on court and it will be a strange experience when we get back on.

“It will be a shock to the system I’m sure but I think all the girls are really excited at the prospect.”

Lucy returned to Crieff High School last week boosted by achieving the Higher results she was hoping for.

Following her final school year she plans to study physiotherapy in Edinburgh.

She added: “Queen Margaret University is my preferred choice which would also allow me the option to train at Oriam (the home of Scottish Squash).

“I definitely want to keep playing when I’m at University, train hard and see where my squash takes me.”