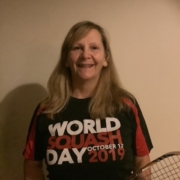 Scottish Squash is thrilled to confirm the appointment of Jenny McArtney BEM on to the Board of Directors.

Jenny has been an influential figure in the sport for many years, particularly across Tayside & Fife, with a broad spectrum of experience in coaching, playing and administration.

As a coach her passion has always been in developing the sport at junior level and she also played a key role in the renaissance of Forthill Squash Club in recent years.

The Monifieth-resident helps organise tournaments in both Tayside and Fife and as a player she has represented Scotland at Masters level, having first picked up a squash racket aged 12.

Jenny’s efforts were recognised in the 2021 New Year’s Honours list where she was awarded the British Empire Medal (BEM) for services to squash.

The 58-year-old said: “When I was invited to join the Scottish Squash Board of Directors I was delighted to accept.

“Maggie Still (Scottish Squash CEO) was looking for someone with on the ground squash experience to complement a Board which has strong managerial and business expertise. 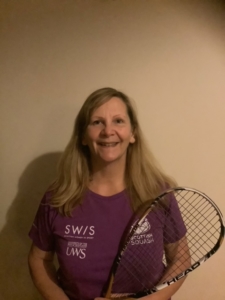 “Hopefully I can bring some value to the group and I’m looking forward to working closely with the other Board members.”

She added: “I was aware through the Tayside & Fife committee that we needed more representation in the region and this certainly helps with that.

“Like all sports, we have a lot of work to do to encourage people back into our game but from speaking to players I know, they are raring to get back on court.

“I’m hoping that enthusiasm is a positive sign of things to come.”

Scottish Squash CEO, Maggie Still, said: “We are really pleased to welcome Jenny on to the Board of Directors.

“She has done so much for squash in Tayside & Fife and her tireless efforts at club and regional level, working in partnership with other good people, has inspired players to become involved, and stay involved, in squash.

“Jenny’s achievements as a Masters internationalist also ensures she is a strong role model for women and girls. Her appointment further supports our drive to diversify the sport and the Scottish Squash Board.”