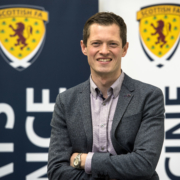 Scottish Squash is delighted to announce the appointment of Graeme Jones as a Non-Executive Director to the Board with responsibility for Performance.

Graeme is an extremely well qualified high-performance practitioner and manager who possesses a wealth of experience working with industry leading bodies, including the Scottish FA and UEFA – leading teams in science, medicine and analysis.

Graeme has worked as an applied sports scientist at every level of international football from Men and Women’s A downwards for more than 10 years and he has worked with World and European football governing bodies, FIFA and UEFA, in the development of physical fitness.

Graeme was appointed on to the Scottish Squash Board following an open recruitment process and will Chair the Player and Coach Advisory Group.

He said: “I am honoured to be appointed as a Non-Executive Director to the Board with responsibility for Performance at Scottish Squash.

“With squash having played such an important role in my social and sporting life over the past decade, I am excited to be able to utilise my professional skillset in the performance support of the players and coaches at Scottish Squash.”

Mark Adderley, Chair of Scottish Squash, said: “I am thrilled to welcome Graeme on to the Scottish Squash Board. Graeme brings sports science expertise of the highest calibre. He has great leadership experience and can demonstrate high level decision-making skills.

“Graeme has a passion for squash. He has played squash for many years and will be known to many people in squash across Scotland. He will provide invaluable support to the Director of Squash in the right areas.”

He added: “We look forward to working with Graeme as we build towards the 2022 Commonwealth Games in Birmingham.”