Welsh Squash played host to the 2015 International Youth Series held at the Saints Squash Club in Prestatyn, North Wales over 27 February to 1 March.

National Coach, Roger Flynn, and Assistant National Coach, Stuart Crawford, drove a squad of 13 players to compete in a team event against Wales and Ireland with the aim of giving the next group of players, vying for senior team selection in the next few years, an opportunity to show their potential.

Teams were manipulated to provide each player with a range of opponents over the weekend with the U18 Team managing to take out title and the U23 team coming runners-up to Wales. Some fantastic squash was on show and most players managed to earn a result that they could be proud of.

This year will be last time the event is conducted in its present format with a move to separate 4-player Men’s and Women’s teams in the future – only players who are not officially listed in their national senior team being eligible. Other countries will also be invited to submit teams to this new event. 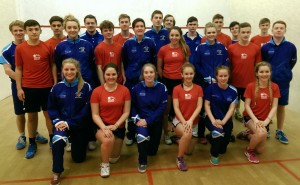