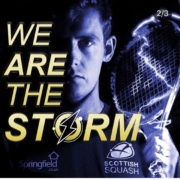 It was a historic night in the capital on Tuesday (November 5) as Alba Storm made their competitive home debut in the Premier Squash League (PSL).

A Scottish-based side are competing for the first time in the PSL’s 36-year history.

The packed gallery at Edinburgh Sports Club (ESC) was treated to some brilliant squash throughout a hugely entertaining and tense night of action.

It was a strong Nottingham side led by former world number one Nick Matthew OBE and Millie Tomlinson (WR23) which narrowly prevailed in a contest which could have gone either way.

It was a match too far for Georgia Adderley after her British Junior Championship title winning exploits on Sunday as French ace Coline Aumard won 4-11, 5-11.

Rory Stewart got the better of Kyle Finch in two high quality games, 13-11, 11-9, to keep Alba Storm’s hopes alive ahead of Lisa Aitken’s match against Tomlinson.

Alba’s number one female produced some superb attacking squash in the opening two games but when Tomlinson levelled things up in a tight second, she eased to victory in the decider 11-8, 8-11, 4-11.

Alan Clyne took on the enigmatic Richie Fallows in the final match which was another entertaining encounter won by Storm – 11-9, 0-11, 11-5.

The 3-2 defeat was the same scoreline as Alba’s opening tie at Pontefract but Scottish Squash Director of Squash Paul Bell hopes to eventually turn these narrow loses into victories.

“The next step is to learn how to win them,” he said this week.

“It’s really fine margins at this level and the types of matches we hoped to get by joining the best squash league in the world.

“Greg and Lisa’s matches could’ve gone either way, they were so tight and competitive.

“Hopefully over the course of the season and beyond we can turn these losses into victories.”

He continued: “Learning to get over the line is a big part of being a successful squash player.

“You don’t have to play really well in every match but there’s a skill to getting the result you need and more exposure to these kind of matches will help our players enormously.”

Alba Storm are next in action away to Birmingham (November 28) in their Northern Division clash before returning north for a second home fixture on Tuesday, December 10 at Hamilton Squash Club.

Paul added: “It’s been an encouraging start by the players and the atmosphere for our first home fixture was amazing.

“Competing in the PSL benefits players and fans alike and there were quite a few youngsters at ESC who will have been inspired by what they witnessed.

“We have an initial three year plan for Alba Storm and it’s got the potential to be really special.”

Full details on the PSL, including a fixture list, can be found at the official website here.