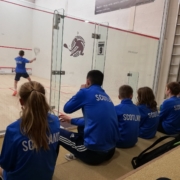 Scotland matched their record entry of 32 players who were competing last week at the 2019 Dunlop British Junior Championships (BJC).

The four-day event, now established as one of the largest junior events in the calendar, saw 450 British players competing across ten categories at five venues around Nottinghamshire and Derbyshire.

Once again it was Georgia Adderley who was the stand-out Scot as she superbly defended her GU19 title.

In a repeat of last year’s final she beat Alice Green in four games.

Georgia started the better of the pair and was quickly 2-0 up.

Alice replied to snatch the third 11-7 before the top seed wrapped up victory in a physical fourth game.

Scottish Squash Director of Squash Paul Bell said: “There won’t be many players with their name on the GU19 trophy twice, it’s a great achievement.

“The BJC has always been a big focus for Georgia and it’s brilliant she’s been so successful.

“With just a couple more junior events for her to compete in she can be very proud of her junior career.”

Scots impressed across the board at this year’s BJC with a total of five Scots reaching quarter-finals.

Anna Halliday finished fifth in the GU15 event losing to the eventual winner Asia Harris in her last eight clash.

Beth Moglia impressed in the GU17 category reaching the Q/Fs and was another Scot defeated by an eventual champion in Torrie Malik.

Louisa Kaven continued her great season finishing seventh in the GU13 event with Zack Paton producing some fine squash during a run to the BU11 quarter-finals.

Paul added: “There’s so much strength in depth across Britain but we had some really good results and performances.

“Our under-11s and under 13s really shone through which was particularly pleasing and it’s encouraging to see so many of our junior players testing themselves in this environment.

“They all had a great time and with five of our coaching team down in Nottingham the players will have learned a lot.”

For full results and photos from the 2019 BJC, click here.

Pictures courtesy of England Squash and other contributors.

We’ll be catching up with three-time BJC Georgia Adderley next week.