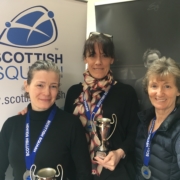 Life begins at 40. Or so the old adage goes.

For Sabine Mackenzie that’s certainly the case in terms of her squash career after a near 20-year hiatus from the sport.

Born in South Africa to Dutch parents, Sabine first picked up a racket aged 12 at her local club in Zutphen, Holland where her mum, a Dutch Masters Squash Champion, coached.

She played tennis as well but preferred squash because, she says, “even at that age I hit the ball quite hard and at least I couldn’t hit it ‘out’ on a squash court!”

Before long she was competing internationally – not for Holland, or South Africa but Scotland.

Her family moved to Scotland and on completion of a one-year residency rule, aged 14 she was donning the colours of her adopted country.

Sabine recalls: “Mum entered me into a tournament near Dundee. I did quite well and was asked to play for Scotland soon after.

“I competed at both under-16 and under 19 level until I went to Queen Margaret College where student life took over.

“I then moved to Bristol after college and played squash for a couple of years before I completely stopped playing.”

So what made her return to the sport?

“I honestly think it was just because I turned 40,” she admits.

“I wanted to find something which provided me with a high level of workout.

“Squash gave me that and I’ve enjoyed it more than I ever did before. It’s now such a big part of my life.

“Squash is brilliant for my health and wellbeing and it sets a really good example for my kids.”

It wasn’t long before Sabine was talent-spotted again, this time at a doubles tournament in Colinton, Edinburgh.

She was encouraged to play in some of the Masters tournaments with her first match at Bridge of Allan Sports Club.

Fast forward 10 years and Sabine is now a regular Scottish Masters internationalist and one of the most active squash players in the country – competing out of both Dunblane Squash Club and Bridge of Allan Sports Club.

In that time she’s picked up five Scottish Masters National titles and enjoyed great success on the domestic circuit.

Before the enforced lay-off she had played 19 competitive matches since the turn of the year, losing just three across both Men’s and Women’s District leagues and Regional Masters events.

The Dunblane-resident was also in training for the now postponed World Masters Championships in Poland, the Home International series and Scottish Masters National Championships.

“It’s a shame because we had a strong-looking over-50s side set for the Home Internationals and the Scottish Nationals are always a season highlight.

“But I’ve looked at this time as a positive. The break has allowed my body to recover from some hard matches.

“I was playing non-stop and my muscles and joints needed a rest.

“That’s been good fun, really useful and having that connection with the girls is important.

“I’m also doing far more stretching than I ever did before, getting out for lots of walks and spending time with the family which is really nice.”

She added: “The fact is squash came to a standstill for everybody and I’m sure we’re all desperately keen to get back on court.

“But the end appears in sight and I’ll be ready, although I’ll probably need to book a court nice and early when we return!”