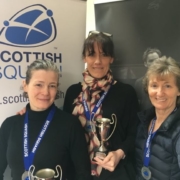 One of Scotland’s most decorated Masters players admits that she struggled to get back on court after Covid, but is delighted that she made those first steps in rekindling her love for the game.

Sabine Mackenzie, winner of the Masters Player of the Year 2021-22, found it tricky to pick up her squash racket again after courts were forced to close several times over a three-year period.

But it was the commitment to captaining Scotland on home turf at the over 50s Masters Home Internationals which served as motivation to start playing again.

Sabine said: “I was really nervous about going back to playing competitively again, because I hadn’t done it for so long, I wondered whether I would feel the same way about squash.

“I kind of thought my squash days were over, because I had started doing other stuff, but it’s really funny how that just changed.

“It’s taken me a while to go back to saying, I really missed it and I actually really love playing.”

And the Masters star would encourage others in a similar position to consider a gradual return to squash, with a renewed focus on playing for enjoyment, rather than competition.

She said: “I would say that it is really important to try and get back on court, from the perspective that it is a huge amount of fun.

“If you’re considering giving it up because you don’t want to play competitively anymore, then that’s okay, because just playing squash for fun in team training or in a club environment is just as good and it gives just as much satisfaction.”

“It’s little steps in moving towards that return to squash, so don’t give up.”

The undefeated victory at the Home Internationals was the highlight of the season for Sabine, and served as the icing on the cake of her return to the game.

She reflected: “We had a really strong team and we came into that competition with a great team spirit, and we were all really fired up to do well.

“I think everybody was quite nervous coming back, and I think we were all wondering how we were going to get on because we hadn’t played competitively, so that was definitely the highlight.” 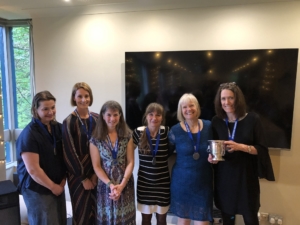 As well as representing Scotland at the highest level, Sabine is also an active member at Bridge of Allan Sports Club and Dunblane Sports Club.

Her nominations for Masters Player of the Year highlighted her commitment to developing squash at all levels, including by helping juniors at the club.

And the five-time Scottish Masters champion feels optimistic about the future, with efforts being made to attract new players to the sport.

She said: “We’ve got a phenomenal coach, Jane Martin, who is really good at being inclusive.

“She brings lots of young children into squash, and we’ll join them on a Saturday morning and play squash with them.

“I think we are realising that people want to play squash at different levels, and that will bring new players in.” 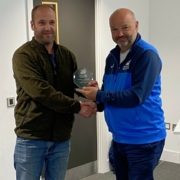 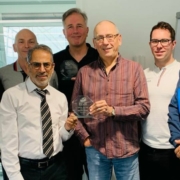 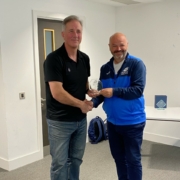 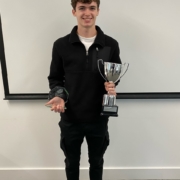