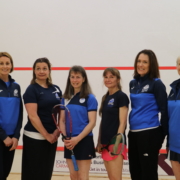 Scotland’s women took the O50 title in style at the Scottish leg of the annual Masters Home Internationals which took place at the Edinburgh Sports Club between the 6th and 7th May. Senga Macfie, Sabine Mackenzie, Kim Byers, Julia Horsburgh and Heather Spens were all undefeated on their way to victory which included a comprehensive 20-5 victory over England and 20-3 win over Ireland.

Scotland narrowly missed out on the 050’s men’s title, beating Wales 20-2 and Ireland 14-7 until they were finally overcome by a strong English team, losing 16-10 in a highly competitive round. Despite the loss, both Simon Boughton and Douglas Emery beat their opponents 3-0 and 3-2 respectively, while Malcolm Kerr narrowly lost a five-game epic against England’s Andy Murray 14-2, 5-11, 11-7, 6-11, 11-8.

It was a similar picture in the men’s O70s. Scotland were undefeated in their matches against Wales winning 20-1 and Ireland where they triumphed 20-4. The 20-7 score line against England did not do justice to the competitive spirit or quality of squash from the Scots, with three of the games going the distance. Ian Ross, Alex Everingham and Alex Allan all narrowly lost their matches 3-2, while Emilio Fazzi pushed his rival Terry Belshaw all the way in a great four game battle that finished 11-3, 11-9, 11-8, 11-9.

Elsewhere in the Masters Home International circuit, it was England who dominated. In the England leg which took place at the Nottingham Squash Rackets Club between 13th -14th May, England took all four titles across the MO35, MO55, MO75 and WO55 categories. Scotland clinched second place in the MO55 and WO55 categories, while coming third in the M035 and fourth in the O75.

It was a mix bag for Scotland at the Irish leg which took place at the Galway Lawn Tennis Club between 22nd and 23rd April. They came third in the M040 category, with a solid 19-5 win against the Welsh, before losing out 20-0 and 20-3 to England and Ireland respectively. In the MO60, it was similar picture, with an 18-4 win against Wales to secure third place. Meanwhile in W060, Scotland narrowly missed out on winning the title after hard fought wins against England 9-5 and Wales 10-7, before losing 9-5 to a resurgent Irish team. Scotland came fourth in the women’s O34/O40 category.

England won all three titles at the Welsh Home International in Cardiff 20th -21st May. Scotland came third in the Men’s O45, including a clean sweep of wins against Wales, whilst in the men’s O65 Scotland fought hard to secure second place in a tightly contested round. After strong wins against Ireland and Wales, Scotland were pipped to the post by England despite a great 3-2 win for Robin Ridley and an emphatic 3-0 victory for the experienced Peter Shivas against Simon Evenden.

For a full list of result visit England Squash Masters