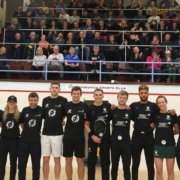 England Squash (Premier Squash League (PSL) organisers) have confirmed that the 2019/20 Karakal PSL has been cancelled due to restrictions around the COVID-19 pandemic.

A statement issued from England Squash on Thursday (April, 2nd) announced, “our primary aim has to be to ensure the safety and wellbeing of all players, officials and spectators, and it is now evident, especially in light of today’s extension of the PSA World Tour suspension, that the world will not get back to ‘normal’ soon enough to complete the current season,” (England Squash Events & Competitions Lead Paul Walters).

The current season has been declared null and void with changes to the league format planned for next season held back until the 2021/22 season.

The 2020/21 season, when it is able to start, will use the same structure and regulations as the current season with all existing teams given the opportunity to compete.

Scottish Squash would like to thank Alba Storm’s headline sponsor Springfield Properties for supporting the development of a world-class team to compete in the league. Thanks are extended to the host clubs and spectators that have supported the team throughout the season.

Scottish Squash will now work towards ensuring that Alba Storm can continue to compete in the league in the 2020/21 season.