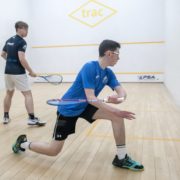 The 2018/19 squash season proved extremely rewarding for Scotland Junior internationalist John Meehan who is now looking to make the next step up when he moves to Edinburgh in September.

It was a breakthrough season for the 17-year-old from Houston who won his first European and National titles, giving him the belief that he can now compete with the best Junior players on the circuit.

Winning the Nordic Junior Open in October was a big moment for John as was his first ever win over fellow Scot Alasdair Prott at a PSA event in Carlisle the following month.

He secured another win over Alasdair at the Joma Scottish Junior National Championships in February which sealed his maiden national title before a top 16 finish at the European Junior U19 Championships in Prague.

Now the Strathgryffe Tennis & Squash club player is aiming to build on his success as he makes the move east for his studies and to be closer to Scottish Squash’s performance programme at Oriam.

Reflecting on his past 12 months, John said: “I’m really pleased with the progress I made last season.

“I always had an ability to play well for a couple of games but was unable to put it together over a longer period in big matches.

“As the season went on I started seeing out crucial games that I hadn’t done in the past and the better results followed.

“Carlisle was the first time I beat Alasdair or even got close to him.

“It made me realise I could compete with that calibre of top player and gave me great belief.”

He continued: “Mindset is a big thing in squash and something I began to work on.

“Once you get to a certain level you need to believe in yourself and if not you won’t win much.

“I had belief that my training with coach Martin Woods had been good and I had the fitness to beat my opponents.

“It was really a case of just backing myself. The results then came as did the increased confidence and improved mindset.”

Having recently completed his final year at Gryffe High School, Meehan will continue his education at Edinburgh University where he will be studying Economics and Statistics.

His squash education will be further heightened with his plan to train at Oriam, Scotland’s National Sports Performance Centre, four times a week.

“Being close to our centre of squash really influenced my decision to move to Edinburgh,” he said.

“Training with the Elite Performance players day-in-day-out will be invaluable for my development and getting regular feedback from the national coaches led by Paul Bell will be brilliant.

“Quite often when we do Junior training camps at Oriam you get to see how the professional players go about things.

“They get their head down and work really hard and it gives you the ambition to do the same knowing they were in your position before.

“They are role models and the chance to play and train with them regularly will be great.

“It’ll be intense, physically hard but very rewarding and it will be good to have other Junior players like Alasdair (Prott) and Harry Barron around who are also starting university in Edinburgh.”

John enjoyed some time off in Spain recently but has been working closely with his West of Scotland Regional Coach Martin Woods, below, on some technical changes back home which he aims to test out at this week’s Dutch Junior Open in Amsterdam (July 11th-14th).

He added: “I quite like a tournament in the summer. It gives you something to train towards and I’m heading to Amsterdam with Alasdair Prott and Andrew Glen.

“Martin Woods and I made some small grip changes to my forehand and backhand which should stand me in good stead for the tournament and the new season ahead.

“I’ve still got 18 months left at Junior level and hopefully I can make some more strides forward and compete strongly with the elite European Juniors.”

Planes, trains and automobiles – title winner Rory Stewart reflects on...
Scroll to top
This website uses cookies to improve your experience. We'll assume you're ok with this, but you can opt-out if you wish.Accept Reject Read More
Privacy & Cookies Policy
Necessary Always Enabled