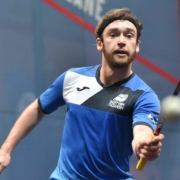 Scotland’s Angus Gillams secured his first PSA Tour title of 2019 with an impressive victory at the Gibraltar Open.

Second seed Gillams began his week with an 11-5, 11-6, 11-8 (28m) win over England’s Ben Coates before showing his fighting qualities in the next two rounds.

And victory over Svec in the final means it’s an eighth career title for Doncaster-born Gillams who reached the semi-finals of the Austrian Open in Salzburg last month.

At the beginning of May, the recently qualified-Scot made his competitive debut for Scotland and played a key role in helping the men’s team secure bronze at the European Team Championships in Birmingham.

The Gibraltar Open was just his second PSA Tour event of the year after some time out the game but his recent efforts will propel his back towards the world’s top 100 with his highest ranking of 62 reached two years ago. Before this recent win he was sitting 128 in the world.

His return to competitive action continues later this month at the $28k QSF Open in Doha, Qatar (July 20-24) where he takes on Belgium’s Joeri Hapers (WR140) in round one.

John Meehan aims higher after making mark on Junior scene
Scroll to top
This website uses cookies to improve your experience. We'll assume you're ok with this, but you can opt-out if you wish.Accept Reject Read More
Privacy & Cookies Policy
Necessary Always Enabled