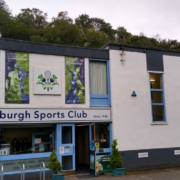 After fourteen more matches today the men’s semi-finals are decided, and the women’s top two seeds stayed on course for a final day showdown.

A crucial early women’s clash between Pontefract and Paderborn, second and third seeds and both unbeaten opening the day – saw Pontefract taking a 3-0 win. Hollie Naughton put Pontefract into the lead with a tough three-nil over Milou van der Heijden, and Katie Smith came from a game down to clinch the victory.

Defending champions Edgbaston kept pace with their third and fourth wins, so barring any further upsets they’ll meet Pontefract on the final day to decide the title.

Men’s top seeds Paderborn, Worms and Viktoria all scored maximum wins to top Pools A, B and C, setting the scent for the evening quarter-finals.

Top seeds Paderborn and Worms remain on course, both still to drop a game as they eased past Fitzwilliam and Espoo in the first pair of quarter-finals.

Fourth seeds Edgbaston Priory, having lost out to hosts Edinburgh in their pool match, bounced back with a 3-1 win over third-seeded Czech team Viktoria. Lewis Anderson and Jan Van Den Herrewegen got the English team off to the perfect start with two 3-0 wins, and once the necessary game was secured the rest of the match was abbreviated.

Edinburgh SC took on local rivals Newlands and they too opened strongly as Chris Leiper and Rory Stewart put them 2-0 up for the loss of a single game. Yesterday’s hero Douggie Kempsell came from a game down to seal the win with Chris George rounding off the 4-0 win.

Four in a row for Edgbaston as Paderborn win dramatic tenth ECC title
Scroll to top
This website uses cookies to improve your experience. We'll assume you're ok with this, but you can opt-out if you wish.Accept Reject Read More
Privacy & Cookies Policy
Necessary Always Enabled