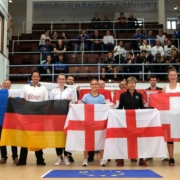 Today’s six women’s matches were all won by the top three seeds – Edgbaston (Eng), Pontefract (Eng) and Paderborn (Ger) both notching up two wins in the seven-team round robin.

Top seeds in men’s Pools A, B and C (each with three teams) Paderborn, Worms and Viktoria all opened with comfortable wins, and in all probability will top their pools tomorrow morning when the quarter-finals are decided.

The match was as close as you’d expect, between the fourth and fifth seeds, but it was Edinburgh who triumphed 3-1, Dougie Kempsell and Chris Leiper both winning in five game to seal the victory and a preferential quarter-final draw.

Full results on the Draws & Results page, plenty of updates on our Twitter Feed, and lots of photos in today’s Gallery.