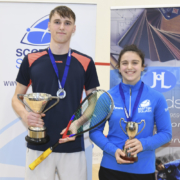 Once again finals day at the JC Lindsay Scottish Junior Open provided some tense and exciting matches with medals up for grabs in ten age group categories.

It seemed fitting that the most decorated Scottish junior player of the past ten years Georgia Adderley would close out the decade with a thrilling five game victory in the GU19 gold medal match on Monday, December 30.

This was Georgia’s final ever junior tournament on Scottish soil with just the Dunlop British Junior Open (January 2-6) left to go before the full-time move into the pro ranks.

The 18-year-old said: “In the fifth game I just said to myself, ‘you’re not losing this.’

“My squash wasn’t great but I managed to pull through and get the win and that’s what matters.

“Lucie is very talented and one to watch out for in the future.

“She’s got a great short game which at times can work really well but towards the end she made a couple of mistakes and let me back in.

“I then tightened my game up, limited the mistakes and was just happy to get over the line and defend my title.”

Gold medals were shared across the globe with India, England and Malaysia players winning two each, Canada, Japan, Columbia and Scotland securing one apiece.

The 2018 BU17 winner Ben Smith added the BU19 title this year in the final match of the tournament.

The Grimsby player said: “It feels good to get my name on both trophies.

“Adam played really well and I had to do everything I could to get the win.

“We’ve played many times over the years and that was definitely one of our toughest matches.

“I had to really dig myself out of some tricky positions throughout the weekend and being able to do that was really pleasing.”

She said: “I competed here two years ago but didn’t make the final so to now lift the trophy is great.

“It’s my first title for a year and my hard work and training has really paid off.

“I enjoyed the tournament and it’s given me lots of optimism for 2020.”

“To get over the line this year is great, I’m really happy that I won,” Azhan said.

“My final opponent played very well, he is a good player.

“My mindset was positive throughout and I’m proud that my training has paid off.”

In a repeat of last year’s BU15 bronze medal clash, ESC’s Rory Richmond once again emerged victorious in the U17 equivalent against England’s Louis Murray (3/4) with Louis retiring injured at 11-6, 11-5, 4-1 down.

Meanwhile the GU15 final was one of the matches of the weekend.

2018 BU11 champion Jayden Oon (5/8) made the step up to U13 level this year and produced an outstanding effort to win gold after a five game final thriller .

Indian Anahat Singh proved why she is one of the best GU13 players in the world after victory at this year’s JC Lindsay Scottish Junior Open.

The top seed was too strong for Keertty Haridharan (2) in the GU13 final winning 11-1, 11-1, 11-1 and heads to the Dunlop British Junior Open this week as one of the title favourites.

The Boys U11 final this year was another high quality encounter which produced some spectacular squash.

Zack Paton (1) was Scotland’s first medalist of the 2019 tournament, going one better than last year in winning BU11 bronze.

A full run down of results can be found here.

Images from this year’s event can be found on our Facebook page, here.