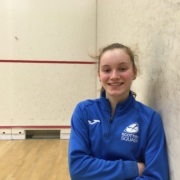 Rising talent Robyn Mcalpine says she is relishing her move up to the under-15 ranks ahead of the 2019 JC Lindsay Scottish Junior Open which begins tomorrow (December 28) in Edinburgh.

Robyn celebrated her 13th birthday on September 1 by winning a silver medal at the Scotstoun Junior Gold tournament – her first event at under-15 level.

Robyn and Sophie will lock horns once again tomorrow morning in GU15 round one action at Edinburgh Sports Club (ESC) as the 2019 JC Lindsay Scottish Junior Open begins.

The Scotstoun Eagles junior said: “I’m really enjoying the step up to under-15s.

“The matches are harder and the draws tougher but it’s better fun and it’s helping me develop my squash game.

“People’s length is so much better at this level. In the younger age group you could get away with more but now I need to be much more precise and have purpose in every shot I make.”

During this year’s JC Lindsay Scottish Junior Open more than 180 competitors from 28 different countries will take to the courts across three days at ESC and Oriam, Scotland’s Sports Performance Centre (December 28-30).

Robyn Mcalpine is part of a new crop of talented Scottish GU15 players looking to taste junior success like Georgia as the 18-year-old makes the full-time move up to the pro circuit in January.

Anna Halliday (silver) and Rowan Nivan (gold) medalled at the recent Irish Junior Open as did Louisa Kaven (GU13 gold) who steps up in age group this weekend.

Robyn said: “There’s a lot of players who have come up the age groups together. We all get on really well which is nice.

“I’ve played Rowan four times in the past two months and beaten her a couple of times but I’ve not beaten Anna yet.

“We all look up to Georgia. I like her determination and will to win.”

She added: “The Scottish Junior Open is one of the best and most competitive tournaments we play.

“There’s so many players from different countries over here ahead of the British Junior Open.

“The atmosphere is always great and we have plenty of support. It’s definitely an ambition of mine to win the Scottish Junior Open.”

The draws for each age group can be viewed here.

Play commences at 9.30am on Saturday (December 28). Entry is free for spectators across all three days.

iPROSPORTS will be on-site offering official event merchandise for the duration of the competition.