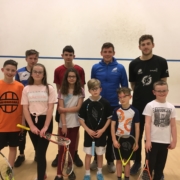 The pair had a hit with youngsters ahead of Alba Storm’s victory over Newcastle in their Karakal Premier Squash League clash at the South Lanarkshire club.

The juniors are some of the early participants in Scottish Squash’s landmark Going for Gold programme, supported by housebuilders Springfield Properties.

Going for Gold was launched this year to provide a sustainable introductory junior development programme through free squash coaching.

Hamilton Squash Club were successful in a recent application process which has seen them roll out a new Club Junior Development Programme.

The new investment is designed to help ambitious clubs make a step change in how they deliver junior programmes by professionalising their coaching infrastructure over a two-year period.

During this cycle 800 hours of free junior coaching development will be available to kids across South Lanarkshire.

In just two months Hamilton Squash Club has signed up 15 junior players through the Going for Gold programme.

Hamilton Squash Club’s Going for Gold coach Matt Bedwell said: “Rory and Greg are really nice guys and they were happy to come on court and help coach the juniors.

“It was great to see the kids with smiles on their faces and hopefully it will inspire them.

He continued: “It has been good to get the junior section going in Hamilton.

“We’ve gone from zero to 15 players in a short space of time.

“More players are coming every week and the structures and foundations are in place for a big push in 2020.

“We aim to take Going for Gold out to primary schools in the New Year.”

Thanks to Scottish Squash’s partnership with South Lanarkshire Leisure and Culture‘s Active School’s team, Going for Gold has the ability to reach more than 140 primary schools and 17 high schools across South Lanarkshire.

The Active Schools Network provides more and higher quality opportunities for pupils to take part in sport and physical activity and to develop effective pathways between schools and sports clubs in the local community.

Scottish Squash would like to thank housebuilders Springfield Properties for supporting the Going for Gold programme.

Robyn Mcalpine enjoying step-up in class ahead of JC Lindsay Scottish Junior...
Scroll to top
This website uses cookies to improve your experience. We'll assume you're ok with this, but you can opt-out if you wish.Accept Reject Read More
Privacy & Cookies Policy
Necessary Always Enabled