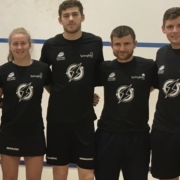 During a hugely entertaining evening, the Scottish-based side won all five of their matches much to the delight of a packed out Hamilton Squash Club.

It follows last month’s narrow 3-2 away win over Birmingham Lions and puts Alba Storm joint second in the Northern Section.

In their debut season, Alba Storm are the first Scottish-based team to be competing in the PSL’s 36 year history.

Rory Stewart got the ball rolling for Alba with a clinical 11-7, 11-6 win over England U19 Champion Max Forster.

Alison Thomson was up next against former England internationalist Sam Ward who took the opening game 7-11.

Alison edged a tight second by the same scoreline and the Scot produced some wonderful touches and sleight of hand to secure victory in another tense 11-7 deciding game.

Alan Clyne then sealed the tie for Alba with an impressive 11-4, 11-6 win against Welsh internationalist Owain Taylor.

Lisa Aitken saw off Yale student Lucy Beecroft 11-7, 11-3 before Greg Lobban made it a 5-0 clean sweep beating a determined Robbie Downer 11-5, 11-5 which thrilled the gallery.

Lisa said: “Hamilton is a great club and it was good to get another win for Alba Storm and showcase more top level squash around Scotland.

“Hopefully we inspired some of the juniors who were watching.”

Greg Lobban added: “It was brilliant to be back playing in front of a home crowd and I enjoyed my match.”

The crowd were in great festive spirit and congratulations to Giffnock player Derek Hanlan who won our Xmas jumper competition and with it an Alba Storm t-shirt.

Storm’s next fixture is at home against Pontefract at the end of January. Dates and venue are to be confirmed.