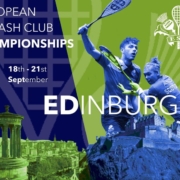 Edinburgh is gearing up for the first ever staging of the European Squash Club Championships in the capital.

It will also be the very first time in its 32-year history that Europe’s marquee club tournament is held in Scotland when the action begins on Wednesday, September 18, at Edinburgh Sports Club (ESC).

A total of 19 teams from 10 different nations are all aiming to become European champions across four days of action which concludes on Saturday, September 21.

The hosts will be led by Rory Stewart and Georgia Adderley, both coming into the tournament in fine form with Georgia having recently been competing in Australia on the PSA Tour.

Rory reached the semi-finals of the Russian Open last month off the back of winning his maiden PSA title at the Mar del Plata Open, Argentina during a month long stint in South America.

Newlands go into the event as Scottish club champions and youngster Fraser McCann is relishing the prospect of competing for his home club in such a huge tournament.

The 19-year-old said: “It’s always a privilege to represent Newlands, a club which has done so much for me since I was a young boy.

“I’ve never played this event before and it will be great to be part of it.

“There’s some world class players competing and it will be interesting to see if I can hold my own against some very good players.

“I’m feeling good and really looking forward to it.”

He continued: “Having the event in Scotland is brilliant and we have a few supporters coming across from Newlands which will be great as well.

“It will be good for them to see their club playing at this top European level.

“I always enjoy the team events, we have a good squad with Fergus Richards, Paul Bell and Angus Woodward as well as Mike Harris coming up from Exeter.

“The women are led by Lisa Aitken and she’ll relish being our number one and competing against other quality players.”

For full ticketing details and other event information, head to the official event website here.

You can follow the action across ESC social media channels with updates across Scottish Squash‘s Twitter platform.