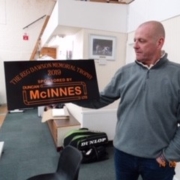 Townend Squash Club in Ayrshire lost a stalwart earlier in the year and a tournament was held in his honour. There were 2 age categories over 50 and over 60. The tournament was well represented and some competitive Squash was witnessed by all.

Good fun and the players participated in a friendly and jovial spirit. With many ex-players and friends came to spectate.

The tournament was sponsored by Duncan McInnes Ltd from Kilmarnock where Reg worked for 53 years, he had a great reputation as a highly qualified and commitment to quality was second to none. His straight talking and dry sense of humour are sorely missed by all at the club.

Reg’s wife and daughter Janice and Deborah with family friends attended the presentation of the prizes.

This is the first year that the tournament has been held and Townend are looking for more entries for next year.

Food and a few drinks were enjoyed after the presentations, where a glass was raised to the Big Man.