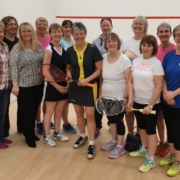 Sue won the Women’s Over 50s title at the same venue last year and was impressive once again in securing the WO55 gold medal on Sunday.

She went unbeaten during the round-robin event winning all four of her matches without dropping a game.

Inverness Tennis & Squash Club were once again great hosts of the Scottish Masters National Championships with the women’s draw boosted by the addition of three more age group categories.

“Inverness Tennis and Squash Club have been brilliant and seeing so many youngsters helping out during the weekend was so good to see.

“It was a really nice atmosphere with matches played in a great spirit.

“There was a good ladies turn out this year but we are always looking for more ladies to take part and dip their toes in our sport.”

She added: “I’m delighted with my squash and pleased to get the win despite feeling nervous.

“Next for me is the WO55s Home Internationals which will be played in Galway this year. Competing for Scotland is always the pinnacle of my season.”

Ailsa, below, won silver ahead of bronze medallist Carole Begg.

Four-time Masters National champion Sabine said: “I thoroughly enjoyed my match with Ailsa in the decider on Sunday.

“It was nerve-wracking playing in front of a home crowd but also great to see so many people watching.

“I was delighted with my weekend’s work, it was an excellent tournament.”

She continued: “We have a lot of ladies at BoA so we are very lucky to be able to practice together.

“There was a bunch of us from BoA who came up to Inverness and we had a really enjoyable time.

“Inverness put on a great event and seeing all the youngsters around was one of the first things I noticed.”

Pauline Douglas was victorious in the W065 competition winning all three of her matches and not dropping a game.

She said: “It has been a lovely weekend and nice to see so many ladies competing.

“I haven’t played this tournament for a while because I only recently moved back to Scotland from South Africa.

“I had some tough matches but it was good fun and pleasing to win a second Masters National title.”

Competing at her first ever Scottish Masters Nationals, Karen Robertson won the WO35s event which was tightly contested.

All three of the competing women ended with a 50% winning record with Karen winning gold courtesy of the number of games won.

Karen said: “I really enjoyed the weekend and it was good to get the win in my first time competing here.

“I knew I had to win two games against Mairi and was pleased to get over the line.

“My mum has previously won at this event so I’m following in her footsteps.”

It was also a first national title for Julia Horsburgh on Sunday as she went one better than 2018.

The Bell’s Sports Centre player finished runner-up to Sue Strachan in the WO50s event last year but sealed gold in 2019.

She won both of her matches in the round-robin format.

“I am very pleased to have won and it will sink in a little more later,” Julia said.

“I was pushed in both matches and had to work hard.

“It is my second time playing at this event in Inverness but it’s an extremely friendly club and well organised.

“It’s nice to catch-up with your Home International friends and we have a good team spirit.”

Eunice Bond is a national champion once again after victory in the Women’s Over 60s category.

The 2018 WO55 winner went unbeaten to seal gold again on Sunday.

The Somerset-based player said: “I am very happy to win a second title in a row.

“It was an enjoyable weekend and I like coming back in Inverness.

“I love being part of the Scottish Squash scene and the camaraderie between players is great.

“The Home Internationals can be quite tense so coming here is more relaxing and I get to enjoy the company of my Scotland teammates.”

Jane Grant was second in the W060s with Norma Marshall finishing third.