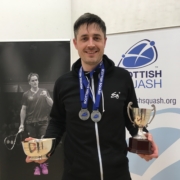 It was an emotional victory for the 40-year-old on Sunday having spent 18 months on the sidelines following a ruptured tendon in his pelvis.

“I was delighted with the outcome,” the top seed said.

“I had never played Andrew or Stuart before but playing on my home court which I know inside out was a key factor in my wins, especially against Stuart.

“Luckily I got to play all my matches on that court and it felt like a homecoming.”

He added: “Andrew is a talented player but I had to be pretty ruthless to save energy for the O40s final.

“Against Stuart I needed to fight really hard to get over the line. He’s a lovely guy and showed great sportsmanship throughout.”

Iain Maltman (6) won the MO35 plate competition with Alex Blake (5) winning the plate in the M040s.

The number one seed beat Angus Woodward (3) 11-8, 11-2, 11-6 in the final producing some quality squash which impressed the court one crowd.

“In the last few weeks I have started to move well and playing in National League’s against a few of the youngsters has really sharpened me up.

“I’ve only managed to play the East Masters on the Masters circuit this season but was very keen to play here.

“I came into the event eighth in the rankings so winning this means a lot because I’m now in the top four and make the Scotland team.

“It has been a great family weekend, we love coming up to Inverness and the club is extremely hospitable and fun.”

Mike Ramsay (1) made the trip north from Queen’s Club in West London and was rewarded with gold in the M050s category.

He was fast-tracked into the Scotland squad for last year’s Home Internationals due to injuries and has not looked back since having never played Masters events until 2018.

Victory on Sunday completed a triple crown for Mike on the Scottish circuit following wins at the Grampian and East of Scotland Masters.

The former ESC and Watsonian player said: “I was a late addition to the Scotland team last year and was determined to qualify outright this time by competing in the Scottish circuit.

“I turned 50 last year and only started playing Masters events after that.

“Playing for Scotland is a real privilege and the team camaraderie is great.

“It has got all my competitive juices flowing and it’s great my body can hold up allowing me to play these events and for Scotland.”

He added: “Paul and I are former teammates from when I lived in Edinburgh 22 years ago and it was so good to get back on court together.”