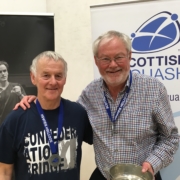 “I was really looking forward to this year and felt in much better shape,” he said after his final.

“I’ve trained hard in the past few weeks and was feeling great come Sunday.

“Chris started well in the final and was 6-1 up hunting the ball early and pressuring me.

“I was getting the ball back but not doing anything with it.

“In the second game onwards I slowed things down and got control.

“Once I had that control I could move freely into all four corners which helped me.

“I was also getting forward quickly which is always a gauge of how well you perform.”

James added: “Inverness Tennis and Squash Club is a great club, everyone is really welcoming and friendly and the courts were in very good order.”

It was a repeat of last year’s final which Robin won in three games and Peter, seeded two, was thrilled to get over the line this year.

Scotland’s longest serving current internationalist, who debuted in 1973, said: “It was a really hard final and I was very pleased to win.

“Robin is seeded number one for a reason.

“He’s such a tough competitor and a very good player.

“I was a bit fortunate with the collision at 6-6 in the fifth when Robin took a blow and that probably affected the outcome.

“But I have been working hard on my fitness and stamina and thankfully a couple of small injuries cleared up just in time for this competition.

“I was relieved to finally get over the line.”

“I can’t thank the club enough for all the hard work they put in and the referees.”

Top seed Jim Dougall took his Scottish National Masters title tally to six on Sunday after victory in the Men’s Over 65s category.

He said: “The field wasn’t as strong as previous years and Ernie had a problem with his hip so I was quite fortunate in the final.

“I play three times a week though because the standard in the Masters circuit is generally very strong.

“I’ll continue to work hard in the coming weeks with the Home Internationals in May followed by the British Open and I might head over to the Hong Kong Open after that.”

He added: “It’ great we have all these Masters events, especially when you retire early like me.

“We’ve been coming up to Inverness for more than 15 years and it’s always good fun competing here.”

This was Ian’s first time competing in a MO70 event this season as he added the Scottish title to his European O70s title won in 2017.

The Grange player said: “I was really keen to play in the Over 70s event with the Home Internationals coming up.

“I’m happy to have won and really enjoyed my time in Inverness as ever.

“Now I will look forward to the Home Internationals in May before the British Open and European Championships in Vienna.”

The Over 75s event was played in a round-robin format and won by Ken Reid (2) who sealed his third Scottish National Masters title.

Ken, who competes out of Oxford University Squash Club, went unbeaten over the weekend winning all four of his matches.

He said: “I beat Tom Kane in my first match and that proved decisive in the end.

“I also played in the MO70s so had six matches altogether which was great.

“This win goes alongside my two Over 70s titles which I won back-to-back when I turned 70 so I am really pleased.”