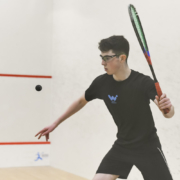 Scotland’s top junior male player John Meehan is hoping his summer training block has paid off when he returns to court at Oriam later this month.

The University of Edinburgh student heads back to the capital in mid-August after spending lockdown at the family home in Bridge of Weir, Renfrewshire.

Members of the Scottish Squash Elite squad have been back on court at Oriam, Scotland’s Sports Performance Centre, for solo practice with distance coaching permitted from the balconies.

John has been putting in the hard yards throughout the extended period away from court and is now looking forward to re-connecting with the Scottish Squash coaching team.

“I’m pretty excited to get back into Oriam,” the 18-year-old said.

“It’s been a long period away from court and just being on a squash court will be brilliant.

“Kevin Moran (Scottish Squash coach) and I made the decision to up my training during lockdown and I’ve had just one week off.

“There’s been some massive areas I’ve managed to really focus on like my physicality, strength, flexibility, movement and technical stuff.

“I’ve done a lot of ghosting in the garden and can see the difference in my movement when studying the video analysis compared to January.”

He continued: “Yoga sessions have been good as well, something I haven’t really done before which can help with strength getting around the court.

“And I’ve also been tracking my sleep patterns with Marek Anestik (sportscotland Head of Performance Physiology) which has been really interesting in terms of recovery.

“I’m realistic enough to know that off court training is very different to competitive squash but I’m looking forward to putting into practice what I’ve worked on.”

Naturally the former Strathgryffe junior was left disappointed when his 2019/20 season was curtailed.

He won the Scotstoun Junior Gold event at the beginning of the season before a fifth place finish at the Welsh Junior Open and securing a bronze medal at the JC Lindsay Scottish Junior Open.

John also won silver at both the Scottish Under-19 and Under-23 championships.

“I was happy with my form and was pretty gutted, especially missing out on the World and European Championships,” he said.

“I’m not sure if there will be many junior events before I turn 19 in December but at my age now I need to look forward and prepare my game to go up a level.

“So I try and look at the positives and during the time away I’ve been able to step back and think more long term about areas I need to improve ahead of the move into seniors.

“If there had been full-on tournaments I wouldn’t have got the opportunity to do that in such depth.”

The Economics student enjoyed his first academic year in Edinburgh combining studies with squash training and residing in Darroch Court Halls of Residence which homes a variety of athletes.

He’s also found a useful balance of mixing up his training between the university facilities at Pleasance sports complex and Oriam, the home of Scottish Squash.

He added: “I’m moving into a flat this term but really enjoyed halls, sharing accommodation with fencers, rowers and runners who are trained to an international level.

“Scottish Squash put in a coach at Pleasance last year and training there with Kevin Moran in the morning then heading to Oriam in the afternoon ensured I got a great variety to my training.

“My training programme was drawn up for me around my uni timetable and the work load has been perfect.”