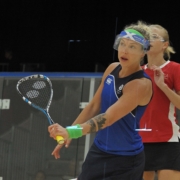 Sport fans have the unique opportunity to watch Scotland’s top squash athletes battle it out for the WSF World Doubles Squash Championships title, which takes place in Scotland for the first time this April.

This historic tournament, organised by Scottish Squash in association with the World Squash Federation, EventScotland, part of VisitScotland’s Events Directorate, Team Scotland and Glasgow Life, will take place at the Scotstoun Leisure Centre in Glasgow between 5th-9th April and promises to serve up five days of high-octane sporting entertainment.

Maggie Still, Chief Executive, Scottish Squash said: “Bringing the 2022 WSF World Doubles Championships to Glasgow is a wonderful opportunity. We’re thrilled to be awarded this prestigious event and be able to offer the people of Scotland the opportunity to watch the World Doubles Championships live for the very first time. We are so grateful to our partners who have worked tirelessly to help us deliver these championships in such a short timeframe.

Our thanks go to Glasgow Life, who have significantly invested in the squash facility at Scotstoun Leisure Centre for this tournament, and to Commonwealth Games Scotland and EventScotland whose investment and guidance has enabled Scottish Squash to raise the bar in event delivery and reach new audiences.

Glasgow is a city renowned for delivering major sporting events with a fantastic atmosphere and we can’t wait to welcome the 15 nations to Glasgow to compete. We hope the people of Glasgow will get behind the event and support Scotland on their quest for another world doubles title.”

Billy Garret, Director of Sport and Events at Glasgow Life, said: “We’re delighted to host this fantastic event in our city, and there is no better venue in the country than Scotstoun Leisure Centre.

“Glasgow is dedicated to attracting world-class events and, like all other cities across the world, we’re intensely focussed on our recovery from the pandemic. A key factor in that recovery is hosting major international events and hosting the WSF World Doubles for the first time is a strong step towards that, as well as further recognition of our world-renowned status as an international sporting city.

“We know that major sporting events can inspire the next generation of athletes, and we have no doubt this event will be any different. We’re very much looking forward to welcoming all athletes, team members, officials and fans to Scotstoun very soon.”

Paul Bush OBE, VisitScotland’s Director of Events, added: “EventScotland is delighted to be supporting the WSF World Doubles Squash as they come to Glasgow and Scotland for the first time. It joins an exciting portfolio of sporting and cultural events taking place across the country this year as we look to rebuild Scotland’s events sector following the pandemic.

“Supporting the return of live events is so important as they play a key role in our communities by providing us with the chance to come together and enjoy great entertainment while also bringing social and economic change to the towns and cities that host them.”

Squash aces Lisa Aitken, Georgia Adderley, Rory Stewart, Greg Lobban, Alan Clyne and Douglas Kempsell are flying the colours for Team Scotland this year, and the hosts will look to recapture the form which saw them clinch the 2016 title at the World Doubles in Australia.

They will be joined by Australia, who dominated the 2019 WSF World Doubles on home soil with wins in all three events in Carrara and are the most successful nation ever at the championships. New Zealand, who have won six events, and England, who won the inaugural men’s event in 1997, will also travel to Glasgow to battle for the prestigious titles. The entry list also includes Hong Kong and India, who hosted the 1997 and 2004 events, respectively. 15 nations will be competing for the title in 2022.

Georgia Adderley ranked 58 on the PSA Tour (as of 25.03.22) is one of the rising stars of Scottish squash. The former three times British Junior Champion has been tearing it up on the world circuit this year, reaching her highest ranking and winning multiple tournaments, which culminated in her Scotland selection. This is Georgia’s first World Doubles tournament and she’s relishing the opportunity:

She said: “It’s an honour to represent Scotland and I can’t wait to test myself against the world’s best. I’ve missed out on selection a couple of times, so I’m super excited to be competing in Glasgow on 5th of April. Representing Scotland is one of the best feelings and although it’s a cliché, pulling on that Scotland top always feels amazing. I have been lucky enough to represent Scotland several times at senior level, but never in a doubles environment so I’m excited to be able to represent my country alongside my partners.”

Greg Lobban has also been on flying form having recently beaten the world number 17 Eain Yow from Malaysia at the Squash on Fire Open in Washington in February. Ranked 37 on the PSA World Tour (as of 25.03.22), Greg is one of the veterans of the Scottish game. He was part of the World Doubles team that won gold in Australia in 2016 and he hopes to repeat this success on home soil.

Greg said: “The World Doubles is one of the last major events in the lead up to the Commonwealth Games, so it’s a great opportunity for the team to play together and hopefully win some silverware. It’s great that Scotland is hosting the tournament this year in Glasgow, the first of its kind since the Commonwealth games in 2014 – to secure an event of this scale is a real coup for Scottish sport and it’s a once in a lifetime opportunity for fans to watch Team Scotland compete against the world’s best.”

For those unable to make it along, all finals matches will be streamed live on BBC sport www.bbc.co.uk/sport.