The Scottish Junior National and U23 Championships took place this weekend at Aberdeen Squash & Racketball Club. All 7 courts were packed out, with non-stop action morning till night.

Sunday afternoon saw the first of the finals take to court. In the Boys U11 Category, Rory Shaw managed to beat Jamie Cargill 3-0 (11-5 11-5 11-8) to take home his first of hopefully many Scottish Junior Championships. Likewise Hugo MacPherson came through a tough age category to take home the U13 result 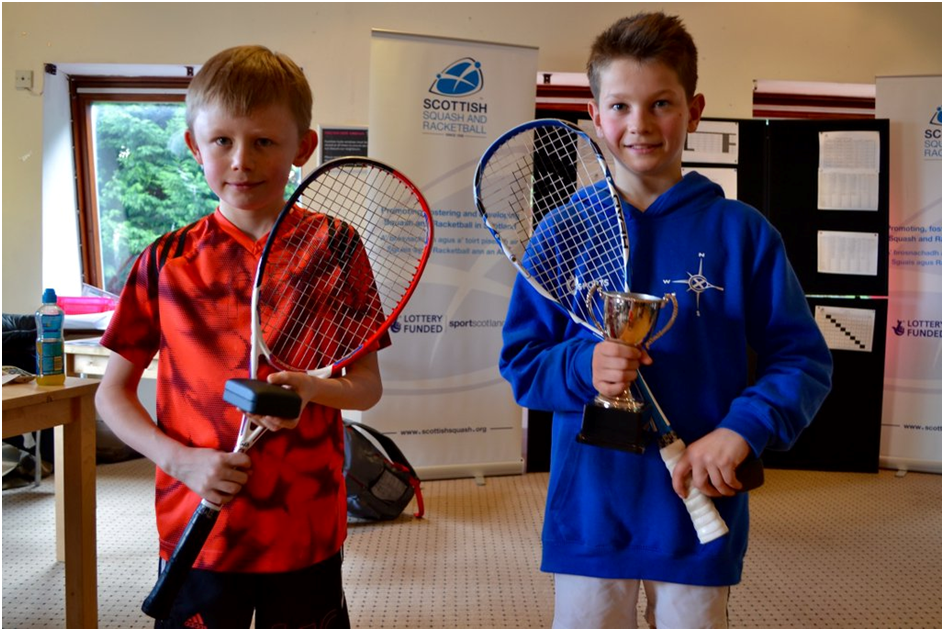 Over on the show court, two titanic Mens U23 semi-finals were about to get under way. Aberdeen’s no1 Chris Leiper was facing off against long-time friend and rival Jamie Henderson. Jamie had beaten Chris 3-2 (12-10 in the 5th) at the Edinburgh Open but, this time buoyed by raucous home support, it was Chris’ turn to take the result 3-2. 9-11, 11-6, 15-13, 2-11 11-9. Question was, would Chris have anything left in the tank for the final after such an effort? 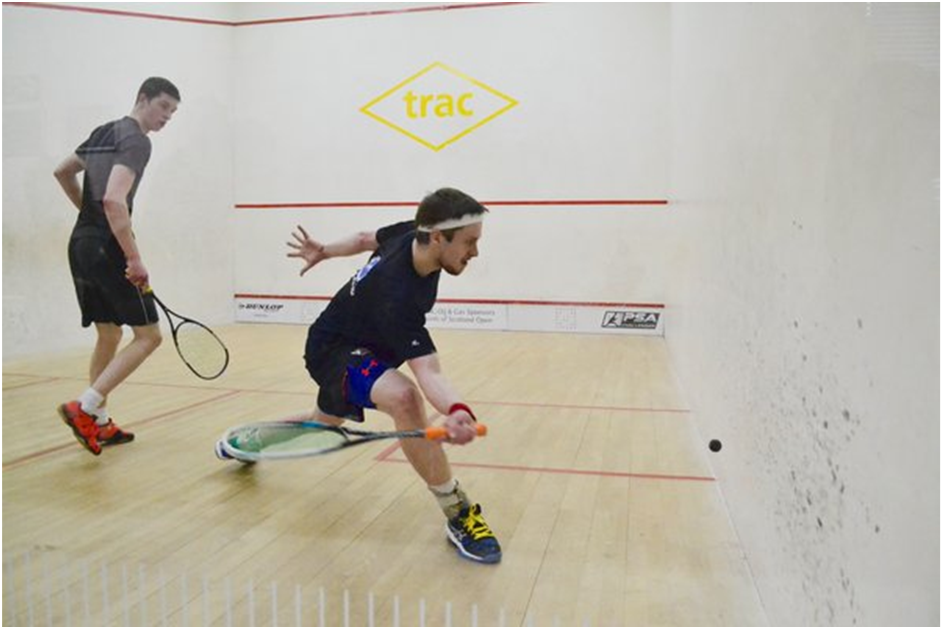 The second Mens U23 semi was between Rory Stewart of Creiff and Dougie Kempsell of Edinburgh. Rory recently beat off stiff competition which included Dougie, as well as Chris Leiper, Jamie Henderson and others to secure a spot on the Scotland Men’s Senior Team. With this in mind, Dougie was clearly up for this match. He set a ferocious pace from the off and although Rory’s talented shotmaking sent Dougie deep into all 4 corners, it was Dougie’s powerful length and width that proved too much for Rory this time. Dougie closed out an efficient 3-0 win 11-7, 11-7, 11-6. 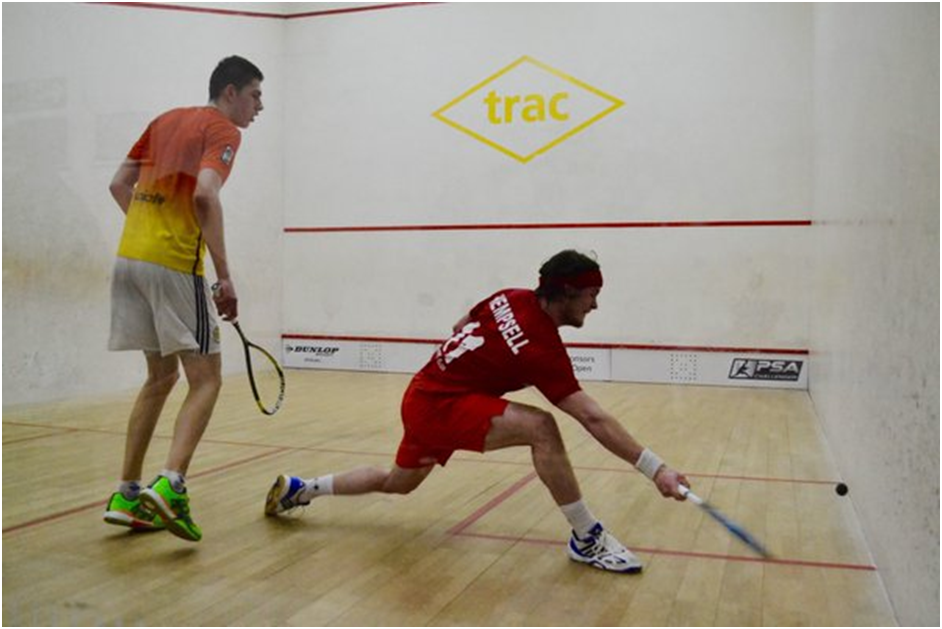 Onto the show court next was the Girls U15 final between Orla Young and Katie Gregson-MacLeod. Both girls played outstanding squash to reach the final without either dropping a game, and the quality of their squash showed why. Ultimately it was Orla’s superior attacking play which made the difference as she closed out the victory 3-0. 11-7, 11-6, 11-6. 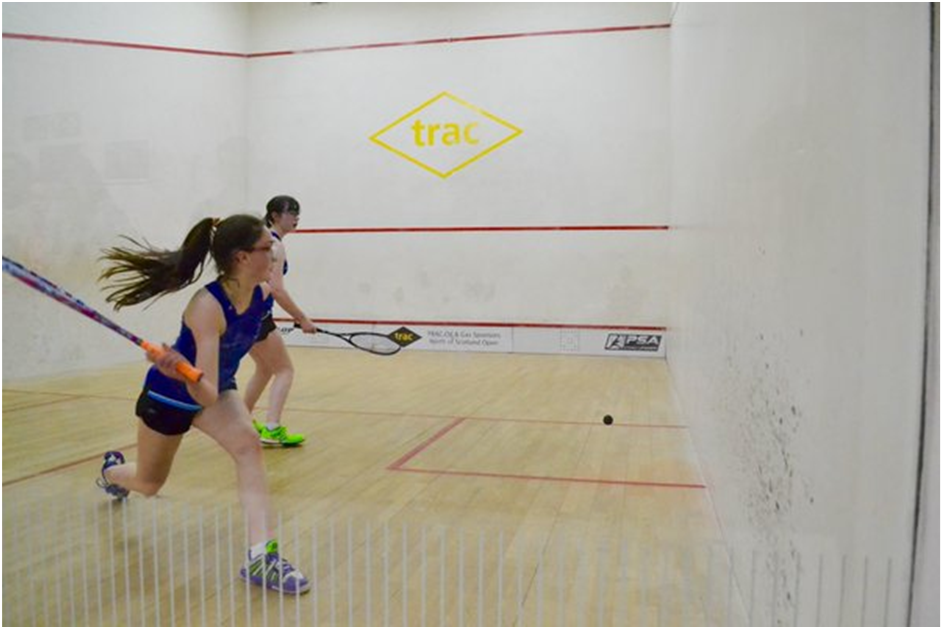 The Boys U15 Final took place between Alasdair Prott of Inverness and Daniel O’Sullivan of Glasgow. Domestically, in his age group Alasdair has been dominant in recent times. Alasdair went into the final with a Scottish Junior Open win under his belt as well as a British Junior Closed runner up title, so all of the expectation was on him to win. Free of any pressure, Daniel played some superb squash while a slightly nervous-looking Alasdair found the tin. To his credit, Alasdair took his game back to basics and relied on his superior length and width to steady the ship and win the match 3-0. 11-9, 11-5, 11-2.

Next onto court was the Boys U17 Final where top seed Chris Murphy was facing Aberdeen’s resident grinder Nathan Sharp. Nathan had endured two 3-2 battles in order to reach the final including an hour-long war with Newlands’ Fraser McCann that morning. True to his reputation, Nathan showed dogged determination and retrieved everything Chris could throw at him. Inevitably the pervious efforts were going to catch up to Nathan and small openings in his game began to appear. Chris took full advantage and, stepping up the court for the 5th managed to close out an impressive 3-2 victory 11-9, 10-12, 11-6, 9-11, 11-8 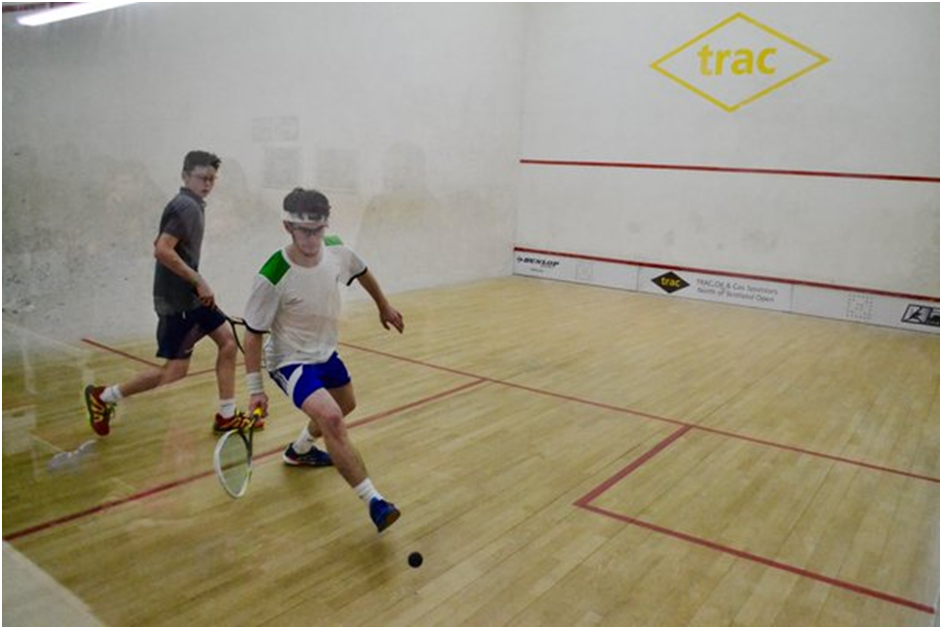 The schedule was adjusted slightly to try to keep rest times between rounds to a similar amount, so next onto court was the Ladies U23 Final between Kirsty Lobban of Inverness and Elspeth Young. Kirsty had beaten the Senior National Champ Claire Gadsby 3-2 earlier to progress to the final and Elspeth, who was dealing with a niggling injury, made it past a spirited challenge by Edinburgh’s Carrie Hallam. Both Kirsty and Elspeth are known as extremely talented shotmakers and they certainly delivered in their final – treating the crowd to some outrageous kills, nicks and stunningly controlled volley drops. Kirsty showed her fighting spirit, battling back to take the 3rd game on a tie break but ultimately it was ‘Scotland’s Omar Mosaad’ Elspeth Young who secured her victory 3-1 11-6, 11-8, 11-13, 11-6. 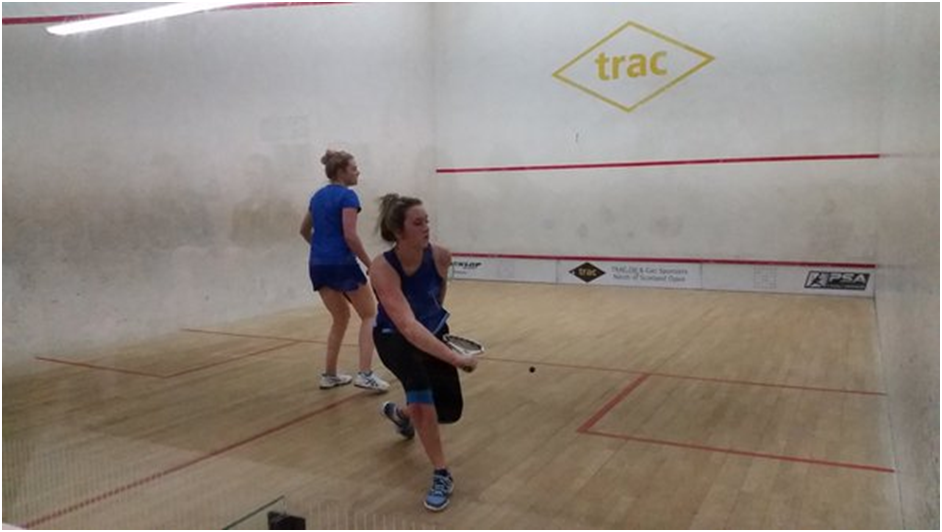 Next it was the turn of the U19 Boys to take to the court, and Aberdeen’s Scottish Junior Open Champ Richard Hollins squared off against Patrick O’Sullivan, brother to Daniel O’Sullivan who featured earlier. Richard started the match positively, taking the ball in short while Patrick was still getting up to speed. After losing the first, Patrick found some outstanding length and width which contained Richard’s attacking play and earned him the next two games. Into the fourth and Patrick began to show the slightest signs of fatigue. The inch-perfect length and width dropped ever so slightly and Richard’s attacking game, coupled with a more structured approach from the home favourite carried him through to the title. A great match and a well-earned 3-2 to Richard Hollins 11-8, 8-11, 8-11, 11-3, 11-5.

The Girls U19 Final was contested between Carrie Hallam of Edinburgh and Emma Fitzsimmons of Dunblane. Emma had actually entered the U17 event but, because the events were played in pools, seized her opportunity to put on an outstanding performance to beat the higher seeded U19 Katriona Allen. Emma therefore progressed to the U19 final as well as picking up the U17 trophy. Carrie showed class and experience in the match, containing her frustratingly speedy opponent and attacking when in front to great effect, sealing her U19 title 3-0 11-8, 11-6, 11-6. 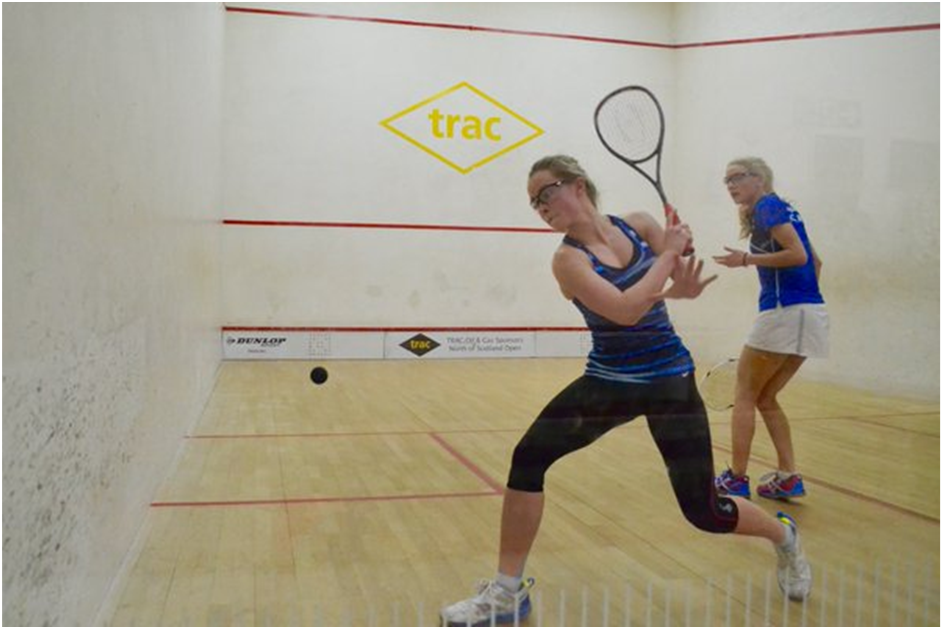 Lastly onto court was local hero Chris Leiper who faced one of his biggest tests in World #101 Dougie Kempsell. Dougie was the favourite on paper, and certainly had less court time in his legs than Chris, however the crowd were wishing their man could give it one more push and get himself across the line. Dougie showed the kind of form that he hopes will take him beyond his current world ranking; going off like a rocket in the first game and really testing the legs of Chris. Chris fought back hard and eventually forced a decider for the first game which went to Dougie on an unfortunate tin. Leiper made the stronger start in the second, getting off to a 7-4 lead. Dougie roared back and took the game 11-8, using his speed and power to great effect. The work Dougie had done eventually paid off in the third game as Chris, fighting with all he had, eventually ran out of legs. Dougie claimed his title 3-0. 12-10, 11-8, 11-7. 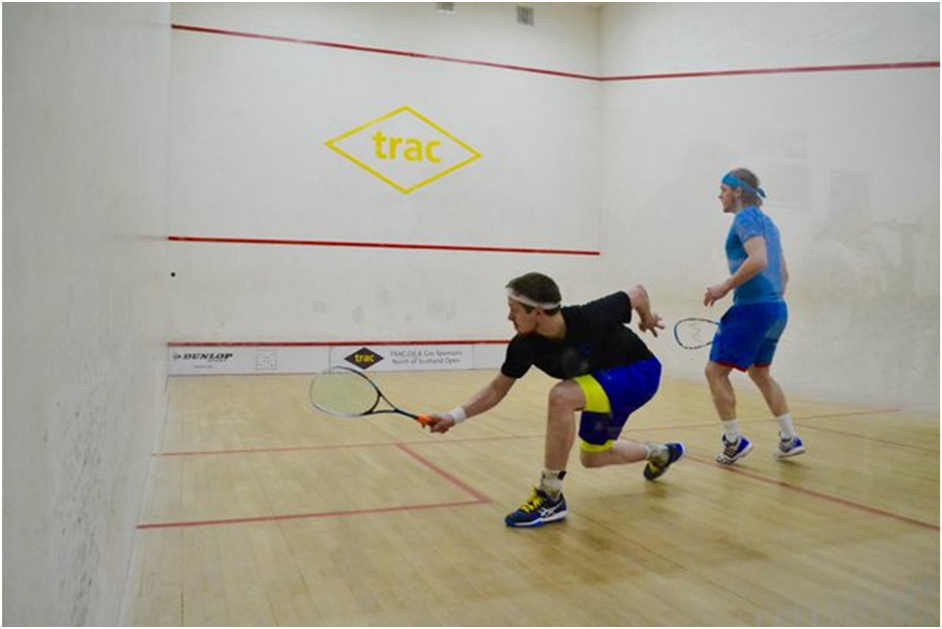 Chris Leiper (left) gave it his all vs Dougie Kempsell

Scottish Squash President Jim Hay congratulated all of the weekends’ players not only for the quality of squash that they produced, but also for the hard fought but fair spirit with which the entire tournament was played. It is positive to see performance Squash in Scotland in such a healthy and positive position. 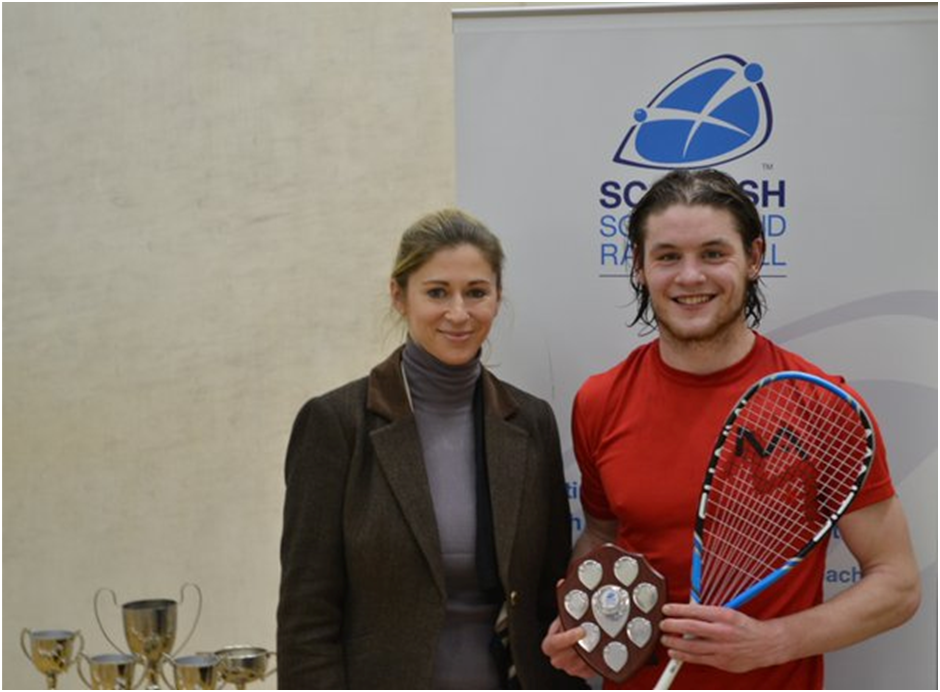