The Scottish Men’s Team to the European Senior Team Championships, in their newly launched kit, proved once again that they are one of the best teams in the world when they finished 4th for the third year running. 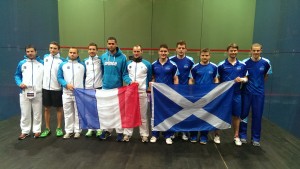 After a hectic tournament schedule over the past few weeks that included the first PSA event in Scotland for many years, the North of Scotland Open, the Paddy “Whack” Walsh Open in Galway and the Irish Open in Ireland, they were more than ready for the toughest day of the competition – the opening day on which they would have to play and defeat Spain and Finland to make the semi-finals.

In the first tie of Pool A, Spain’s team featured world No.5, Borja Golan, the experienced Alejandro Garbi and Carlos Cornes and the up-and-coming Iker Pajares.

Things didn’t look good when Dougie went down 3/0 to Cornes while Alan had also lost the first and was 9-5 down in the second. Chris was surprised by the effort of the young Pajares and lost the first 13-11 but meanwhile, Alan’s gameplan began to take dramatic effect and he reversed the trend to win the second game 12-10. Chris lost the second game 11-7 but was given a boost when he heard that Alan had turned the tables on Golan. He went back on and won the next two games 11-1, 11-7 to level the score. Alan carried on in his match to completely dominate Borja 11-7, 11-6 to win 3/1 and Chris then managed to scrape the fifth 16-14 in a massive physical effort that put Scotland 2-1.

Greg had already begun his match against Garbi and although he won the first 11-6 was struggling with the distraction of knowing that Chris was 2/0 down. Garbi is renowned for his performances when playing for his country and he took advantage of Greg’s tentativeness to win the next two games. With Spain leading on games, the only way that Scotland could win was for Greg to turn this around and win the match… and, hearing that Chris had won, this is exactly what he did – winning the fourth 11-9 and the fifth 11-6 to give Scotland a seemingly clear-cut 3/1 win but the result could have been very much different.

After a fairly brutal first tie, the skills of our support staff, Kerry and Neil, were then called on to ready the players for their next match against Finland – scheduled for just 5 hours later.

When 6:00pm came around, the Scots were ready with Kevin taking Chris’s place at No.4 in the team to play against Finland’s Olli Tuominen (world No.27), world No.38, Henrik Mustonen, Jami Aijanen and Jaakko Vahamaa.

Dougie started us off strongly with a 3/0 win but Alan was struggling against Tuominem – going down 11-2 in the first but starting to get his game together in the second only to lose it 14-12. Kevin took to the court and earned his first senior win for Scotland 3/0 while Alan and Tuominem continued their battle… Alan taking the third game 12-10 to win the tie for Scotland but then going down 11-9 in the fourth with both players on wobbly legs.

In the final match of the day, Greg was determined to avenge his 5-game defeat by Mustonen at the World Men’s Championships in June last year. He started strongly to take the first game 11-6 using his change of pace to baffle and frustrate the Fin. Second game – much like the first but errors creating a closer scoreline 11-9 to Greg. At 8-all in the third, after his big 5-set match in the morning, fatigue began to show and a couple of ambitious attempts at winners brought the opposite result… 12-10 to the Mustonen. A superb 4th game saw Greg re-ignite his commitment to his game-plan – completely dominating the Fin to take a fabulous game 11-7 and another 3/1 win to Scotland – cementing our place in the semi-finals and a guaranteed top four finish.

In the final match of the pools, Scotland v England, we chose to rest our Nos.1&2 in order to let them prepare to take on France in the semi-finals and then either England or Germany on the last day to potentially earn a podium finish.

With the other players all losing 3/0, the surprise of the tie was Stuart Crawford’s performance against Adrian Grant in which he won the first 11-6 and narrowly dropped the second 14-12 before going down in 3/1, 11-3, 11-2.

We planned to use Alan, Greg, Dougie and Kevin in the semi-final against France and then to use Chris and Stuart in the final match the next day – whether this was the final or the 3-4 playoff.

In our first match on the glass court, Kevin started proceedings in an entertaining and skilful match against Lucas Serme, ranked 65 places higher in the world rankings. Serme’s experience proved to be too strong and he overcame the spirited Scot’s attack 3/0.

Second match on was Alan against current world No.1, Greg Gaultier and what a match it was. With both players seeking to increase the tempo, both were invariably standing well in front of the Short Line. Gaultier appeared shocked at the intensity that Alan was creating and was bemused by some of the winners that he played. The end of each game was owned by the Frenchman and he eventually won a highly entertaining, superb tempo match 3/0.

With the Scots now 2-0 down, losing another game would end the match and so Greg took to the court against world No.23, Mathieu Castagnet to try to salvage the tie.

Continuing the form he had displayed throughout the event, Greg completely dominated the first game to win 11-6, but the experience of the Frenchman began to emerge and the result was reversed in the second – Greg going down 11-3 to give the French the tie and a place in the final and Scotland a shot at Germany again for a place on the podium.

The final tie of the tournament was drawn in the order 2-1-3-4, with Greg leading out against Raphael Kandra, ranked 13 places higher in the world rankings. Having defeated the German in the 3-4 playoffs last year, this was expected to be a pivotal match and so it proved to be… Kandra winning the first two games 11-3, 11-7 before Greg pulled it together to win the third 11-4 and giving the Scots some hope. A close-fought 4th game ended in favour of Kandra and Germany took an important 1-0 lead.

Germany’s No.1, Simon Rosner (world No.12), showed his respect for the expected match against Alan Clyne by taking a rest against England in the semi-finals. The upshot was two great players going hammer-and-tongs in an amazing, high intensity match in which the German’s experience finally manifested – eventually winning 3/0 in a world class display.

With a game up its sleeve, Scotland now needed to win the next two matches 3/0 if it was to take a podium finish – or, losing one game, it would all be decided on points.

Chris Small took to the court in what was to be his final match for Scotland against Jens Schoor (world No.86), whom he had defeated 3/0 in their previous confrontation. After a great start winning 11-7, he went down in the second 11-3 an then a close fought third 11-9 to give the German’s third place – also for the 3rd time over the Scots.

Although expectations were that Scotland could achieve a podium finish, and the associated disappointment of not reaching that goal, the performances of the players were world class, the performances of their opponents needed to be world class in order to defeat them, and the respect for the Scots, shown by their various opponents, demonstrates that Scotland has arrived as a force in world squash.