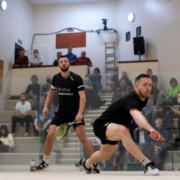 After a difficult year, the PSA tour is heating up with two tournaments in quick succession; the Commercial Water Solutions Grange Open, a men and women’s tournament which kicks off at the Grange Club in Edinburgh between 1st and 5th December, followed by the Lockerbie Challenger which takes place at the Lockerbie Squash & Racketball Club between 8th and 12th December.

Nine Times Junior Champion Alasdair Prott, aged 20 from Inverness, faces Pablo Quintana Estevez from Spain in the first round at the Grange Open on 1st December, and fellow Scot John Meehan in the opening round of the Lockerbie Challenger on 8th December. Alasdair is currently ranked 206 on the PSA Tour, up from 357 after a busy year competing at 10 PSA tour events. He narrowly missed out on Scotland selection for the World Team Championships in Kuala Lumpur, after being beaten 3-2 by Fergus Richards at the quarter final of the David Lloyd Men’s Open in November.

Alasdair said: “It was disappointing to lose to Fergus at the WTC Scottish selection event, but my rankings show I’ve had a decent year and I’m looking forward to getting back to winning ways at the Grange Open and Lockerbie Challenger.  It’s always great to compete back in Scotland. It was awesome playing in my hometown at the Springfield Scottish Squash Open in Inverness in September, and these two events will have a similar feel.”

John Meehan aged 19 from Bridge of Weir is drawn against Seif Shenawy from Egypt in round 1 of the Grange Open and faces Alasdair Prott in the opening round at Lockerbie, where he is one of three wildcard entrants. John is ranked 290 on the PSA tour, up from 672 at the start of the year. He made the ¼’s of Holmes Naden Prestbury Open in October, beaten 3-0 by Curtis Malik from England, was runner-up at Lexden RFC Open in August and a semi-finalist at the Charing Cross Classic in June.

John said: “I’m looking forward to getting back on court for these two Scottish events. Seif will be a tough challenge at the Grange. Egypt produces some fantastic players on the tour, they are really dominating at the minute. It will be great to play against Alasdair at the Lockerbie Challenger. He’s someone I know very well and we’ve had lots of good battles over the years. I’m looking forward to the challenge.”

Martin Ross, aged 26 from Inverness, meets Sam Todd from England in the opening round of the Grange Open and enters the Lockerbie Challenger as a wildcard, facing England’s Hasnaat Farooqi in round one. Martin has had a successful 2021 so far, with two quarterfinal spots at the NM Academy Open and a Scottish Circuit Event. He has jumped from 634 to 311 in rankings this year.

Martin said: “It’s always special to have PSA tournaments in Scotland, so I’m really looking forward to the Grange Open and Lockerbie Challenger. I’ve never played either of my first-round opponents before. I think it’s always good to play someone new. Sam has won a couple of events recently, is the number one seed for Grange and is shooting up the rankings so that will be a tough one. Hasnaat has been on the tour longer than me so is more experienced at this level, but hopefully I can get stuck into both matches and cause an upset.”

Chris Leiper, aged 28 from Aberdeen, is a wildcard entrant at the Grange Open where he faces England’s Hasnaat Farooqi in the first round, followed by a match against Ben Hetherington from England at the Lockerbie Challenger on 8th December. He’s currently ranked 357 on the PSA Tour,   making the semi-finals of a Scottish Circuit Event in August where he was beaten by fellow Scot Fergus Richards 3-1.

Chris said: “After a tough 2021 for players and clubs in Scotland, it’s great to see more clubs looking to put on events to raise the profile of the game and provide opportunities for competitors to play.”

James Singh, aged 27 from Glasgow, is one of the four wildcard entrants to the Grange Open. He faces Paul Gonzalez from France in the first round.  James is currently ranked 537 and made the quarter-final of a Scottish circuit event in Edinburgh in August.

James said: “It’s been a frustrating 18 months, but it really feels like the tour is back on track with a number of events taking place at the back end of the year. I’m really looking forward to my match against Paul Gonzales at the Grange in December. He’s ranked 258 on the tour and is a tough competitor, so it will be a good challenge for me.”

Andrew Glen, aged 19 from Glasgow, is a double wildcard entrant for both the Grange Open and Lockerbie Challenger. He faces England’s Ben Smith at the Grange and then Paul Gonzalez from France in Lockerbie. Andrew is currently ranked 590 on the PSA tour.

Andrew said: “I’m chuffed to secure two wildcard entries to these prestigious Scottish tour events. I’m new to the senior tour so these tournaments will be a great learning experience. Both Ben and Paul are ranked above me and have had busy years competing on the tour, so it will be good to see how my game stands up against them.”

Fraser Steven, aged 21 from Thurso, is a wildcard entry at the Grange Open where he meets James Peach from England in the first round. He’s ranked 651 on the PSA Tour and has only competed at one Scottish circuit event in Edinburgh this year where he was beaten in the first round by Fergus Richards 3-1.

Fraser said: “I’m happy to be selected as one of four wildcards for the Grange Open. 2021 has been a quiet year for me so I’m grateful to have the chance to compete at the end of the year and really kick on in 2022. James has had a strong year, with a win at the David Lloyd Open in November and a quarterfinal place at the Sutton Coldfield International, but I’m up for the challenge.”

Click on the images for the latest competition draws: 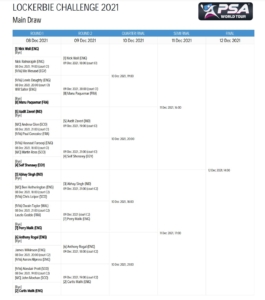 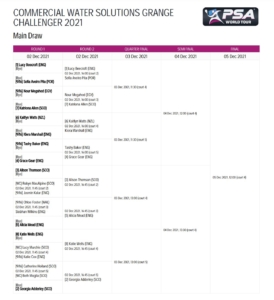 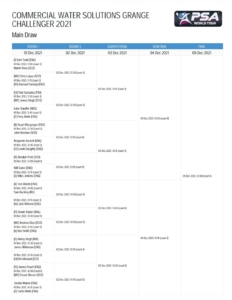