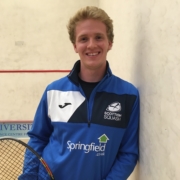 Fergus Richards, the 25-year-old squash pro from Elgin, will represent Scotland for the first time at the upcoming WSF World Team Championships, which takes place in Kuala Lumpur in Malaysia between the 7th and 12th December 2021. The Scotland team announced by Scottish Squash this week comprises of Greg Lobban (Inverness), Alan Clyne (Inverness), Rory Stewart (Perth) and Fergus Richards (Elgin).

Fergus, currently 175 on the Professional Squash Association (PSA) world rankings, battled through a tough senior selection competition at Herriot Watt University in October to secure his place in the Scottish team. He came from 2-0 down to overcome fellow Scot Alasdair Prott 3-2 in a pulsating final. Fergus has had a great year, climbing to 175 from 340 on the PSA world rankings and making a final and semi-final at two PSA Challenger Tour events.

Fergus said: “I’m delighted to be selected to represent my country. I’m buzzing and I can’t wait to get out there and show what I can do. Coming back from 2-0 again Alasdair to win the selection tournament was a great feeling. It will be an honour to wear the shirt for Scotland.

It’s been a tough couple of years with all the Covid disruptions, so this feels extra special. It’s been hard keeping motivated, doing all the training without an end in sight. I’ve tried not to think too far ahead and take each day as it comes.

Since returning to the circuit, I’ve been feeling great and managed to turn that energy into some decent form on the PSA World Tour. I’ve got an event in London and Birmingham over the next couple of weeks before flying out to Kuala Lumpur for the World Team Championships. I can’t wait.”

Currently sitting at 34 on the PSA world rankings, Greg Lobban from Inverness is Scotland’s highest ranked player. He has represented Scotland over 100 times and achieved a career high of 21 on the world rankings after reaching the last 16 of the Manchester Open during the 2020-2021 campaign. This is Greg’s fourth World Team Championship.

Greg said: “Firstly a big congratulations to Fergus for winning his first cap – it’s a real honour representing your country. I’m sure he’ll enjoy the experience. A first cap is something special.

I’ve been lucky enough to represent my country several times, but it never tires, and every occasion feels different. We spend 95% of our time playing individual tournaments so the team structure is a welcome change. I really like the camaraderie and representing your country adds something extra.

I’ve had a tough 12 months due to Covid disruptions and my performances have suffered a bit as a result – but the World Team Championship is a real opportunity to play well and kick on from there. We also have the Commonwealth Games round the corner, so 2022 will be a big year.”

Ranked 76 on the PSA world tour, Rory Stewart from Perth has had a stellar season so far. He won the Novum Energy Texas Open in October beating Sam Todd 3-2 in an electrifying final, as well as winning the Carlisle PSA Squash Club Open and reaching the finals at three further events on the PSA World Tour this year. This is the second time Rory has represented his country at the World Team Championships.

Rory said: “It’s great to be selected for the World Team Championships again. After a strong 12 months on the PSA World Tour, particularly my recent win at the Texas Open, I feel on top form going into this tournament.

I can’t wait to pull the Scotland jersey on again. It’s always a privilege playing for your country in front of the fans and with your teammates behind you. It’s a unique experience, and like nothing else on the tour. We all look forward to the teams’ format. We’ve got a strong team this year, so hopefully we can go deep into the tournament.”

At 35, and with over 150 caps to his name, Alan Clyne from Inverness is Scotland’s most experienced player. Alan last competed at the World Teams in 2019, when Scotland finished 7th after narrowly missing out on a semi-final place after losing to Wales. By his own admission it’s been a tough year, having struggled to find form on the PSA World Tour. He’s determined to use the World Team’s as a springboard to success in 2022.

Alan said: “The world teams is one of my favourite events – I was disappointed to miss out on the 2020 and 2021 European Championships due to the Covid pandemic. This will be my first major tournament since the World Team Championships in 2019, and I can’t wait to get out there.

Playing for Scotland is a unique experience. Squash can be a lonely sport, so the teams format brings a fresh take on things. We support each other, and everyone has each other’s back. It’s a great feeling.

There’s no doubt it’s been a hard road back to form for me since lockdown. I struggled to find my rhythm at the start of the season and lost a bit of confidence in my game.

More recently I’ve got to the semi-finals at the Marietta and HSC Opens in September and October, so I feel like I’m beginning to turn a corner. 2022 is going to be a big year, and I can’t wait to get going.”

The World Teams Championship is held bi-annually at different venues across the world. The last event took place in 2019 at Squash On Fire in Washington, D.C. in the United States and was won by Egypt who have dominated the sport in recent years. The tournament involves up to 30 international teams who compete in groups followed by knockout stages. Scotland came 7th in 2019 and with a strong team, are confident of going further this year.