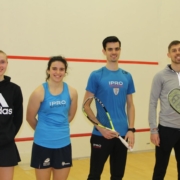 The best was saved until last when Georgia Adderley, who has had a stellar season so far, added to her three 2021 titles with a great win at the Commercial Water Solutions Grange Open on Sunday, beating number four seed Grace Gear 11-7, 9-11,11-9,11-5 in the last final of the tournament.

After winning the first game 11-7, Adderley showed her mettle when Gear came back 9-11 in the second game, forcing her to find another gear and race into an unassailable 3-1 lead.

After receiving a bye through to the second round, Georgia went on to beat fellow Scot Beth Moglia 3-0 inside 16 minutes, the number 8 seed Katie Wells 3-0 in the quarters, and the number five seed Alicia Mead in a tough four game semi-final.

Georgia said: “I’m really happy to win on home soil last weekend. I played well all week and it’s great to win another title before the new year.

I have one more PSA event in Hamburg this week which I am looking forward to. 2022 will be a big year, with my full focus on selection for the Commonwealth Games. It’s a dream of mine, so I will be working day in day out to try and make it happen!”

Katriona Allen, the number seven seed from Edinburgh, had a good run to the quarters, beating Sofia Aveiro Pita from Portugal 3-1 in a close run second round match, before losing in straight games to Lucy Beecroft in the quarters.

Robyn McAlpine made it to the second round with a great 3-1 win over England’s Jasmin Kalar, before a tough 3-0 loss against fellow Scot Alison Thomson. After receiving a bye to the second round, Alison was beaten in the quarter finals to an in-form Alicia Mead. Wild card Beth Moglia, beat fellow Scot Catherine Holland in a pulsating five game thriller, after being overcome by the in-form Georgia Adderley in the second round.

Lucy Murchie, the final Scot in the draw, lost her opening round game 3-0 to England’s Katie Cox.

In the men’s draw, Alasdair Prott from Inverness and Chris Leiper from Aberdeen made it to the second round. Alasdair beat England’s Carlton Oldham 3-0 in convincing fashion in round 1. He came back from 2-0 down in a fantastic five game thriller against England’s Miles Jenkins, only to be pipped to the post in the final game.

Chris stormed into the second round inside 30 minutes with a solid 11-2, 11-4, 11-7 win over England’s Hasnat Farooqi, but was beaten in a battling 3-0 second round match against Sam Todd, also from England. There were some solid performances from the remaining Scots in the draw. John Meehan fought hard in a four-game thriller against England’s Stuart Macgregor, coming from a game behind to level before Stuart won the final two games to make it to the next round.

Martin Ross and James Singh were both unlucky not to get more from their first-round matches with high scoring games throughout. A full break down of the results and scores can be found here.