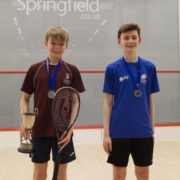 Scotland’s junior squash players were on top form at the Scottish Junior National Championships at the Oriam in Edinburgh over the weekend. Over 80 juniors from U11 to U19 competed over three days of high-octane squash watched by an impressive contingent of spectators. The junior championships have been on ice since 2020 due to Covid restrictions and it was plain to see how much everyone was glad to see it return.

The championships were littered with great performances both from a technical standpoint, and the positive way players approached their matches.  In the girls U11 draw, Sophie Ballentyne from Glasgow didn’t drop a game on her way to the title, beating Willow Henderson, Jessica Craig-Gould and Eilidh Young in three. Winning over 80% of her points, it was an impressive display from the tournament’s youngest player.

Sophie said: “It was great to win, this is my second U11 title of the season. I was really happy with my game, I think my high serve was what won it for me.”

Omar Farag from Glasgow cemented his position as one of Scotland’s top young players winning all of his matches 3-0 on the way to the U11 boys title. Rafael Gordon put up stiff resistance in the finals group, particularly in the second which finished 12-14 after some great play from both competitors.  Omar didn’t have it all his way in the last either, with Rafael battling to stay in the game, but eventually he came out on top 8-11 in a nail-biting finish. The match finished 4-11, 12-14, 8-11.

Andrew Ross and Brodie McMaster competed well to win their Box 2 and 3 finals groups, with Andrew showing great focus and determination to get through a tough three game match against Callum Smith on Court 7, finishing 11-6, 11-9, 11-8.

Chi Pui Felicia Chan was in great form in the girls U13 draw, winning all four of her game 3-0. Chi’s toughest game was against Alice Redding who was the eventual championship runner up. The game finished 9-11, 8-11 6-11 with Alice working hard to say in all the games, and both players showing off an impressive array of shots in an entertaining match up.

The five-game epic between Charlotte Nevard and Phoebe Hamilton was the game of the draw, with both girls playing consistent squash and keeping unforced errors to a minimum.  After narrowly losing her first game 11-8, Phoebe came back strong, winning the second and the third 4-11, 8-11 before a titanic fourth 12-10, where Charlotte was able to dig deep to square the game. Phoebe was then able to close out the match 6-11 to take the match.

After recently recovering from Covid, Zack Paton from Nairn did well to make it to the final of the U13, winning his quarter and semi-final clashes against Hector Coats and the number four seed Thomas Myers in three.  But the best was saved until last when Zack met his old rival Cailean McAlpine in a mouth-watering final match up. After a solid first game, which Zack won 11-7 with some great cross court winners and deft lob shots, Cailean came back well winning the next two 4-11, 6-11. Cailean was using his short game to good effect, getting Zack out of position with back court drives then pulling him back in with a drop.  But Zack didn’t let his head drop. He kept calm and came back strongly in the fourth with some impressive side wall boasts to square the match. But the effort of the game showed in the fourth with Cailean capitalising on some unforced errors to win the title. A great game from two talents of the future.

Cailean said: “Its great to win the final. I tried to play a basic game in the final, so didn’t play too many drives or drop shots. This is my second win of the year after winning at the Gold in Aberdeen. Next up is the Five Nations in April which I’m really looking forward to.”

Winning 83% of her points, Ella Bannister from Glasgow was the deserved winner of the Girls U15 draw. She won all her games 3-0 on the way to the title and only dropped 22 points across all three contests. Ella did well to control the T with some great movement, as well as using her strong service game and drives to good effect.

Across the draw there was some great match ups including Eden van der Esch’s five game epic against Isla Hamilton which finished 11-6, 3-11, 3-11, 11-9, 11-9. Eden showed great mental strength to come back after losing the second and third. She found a way to shift the momentum in the fourth and fifth by reducing her unforced errors and playing more aggressively. Eden’s game against Isla Cargill was another classic, and once again a match she turned around after being 2-1 down after the third.

Ella said: “It feels good to win the U15 title. We’ve been away from squash for so long because of Covid and everything, its good to be back. I was happy with my volleys, drop shots and drives so overall my game was pretty good. In the final Isla was doing some great cross court shots and to the back of the court which was tough. Next for me is the Five Nations.”

The number 1 seed John Green from Edinburgh had a dominant run to the boys U15 final, where he beat Archie Niven 11-4, 11-7, 11-6. John held the T well throughout, forcing his opponent out of position and using some tight wall drives to great effect. In the final Archie fought hard to stay in the points but found the tin a few times in an effort to carve out some winners of his own. Despite the score, it was close final with some great squash on display.

In the 3rd place playoff, Murdo Mackenzie survived a scare in the third having been 2-0 up when James Beaumont stormed into the lead and won it 11-1. But Murdo kept his head and won the fourth 4-11 in convincing fashion. Aran Gibson also had a memorable win against James Newman. After being outplayed in the first game 11-1, Aran found another gear and battled hard to win the second and third 8-11, 9-11 only for James to grit out the fourth 11-9 to square the match. Aran played a more measured game in the fifth, closing it out 8-11 in one of the hardest fought matches of the draw.

John Green said: “I’m really pleased with my performance in the final. I’ve played Archie before so I had a game plan for him. He’s a difficult opponent so I had to be on my game. This title adds to my Junior Gold earlier in the year so I’m happy with the season so far. I’d like to thank my coach at Watsonians and Scottish Squash for their support”

The number 2 seed Robyn McAlpine from Glasgow had a great tournament, winning the girls U17 final 3-0 after a dominant display against Louisa Kaven. Robyn played some accurate winners above the tin to put her opponent under pressure and used her short game sparingly to keep Louisa guessing.

The boys U17 draw went to from with the number 1 seed and favourite Kyle Penman from Bridge Of Allan cruising to victory with assured wins against Ammar Alakrat in the quarters 11-2, 11-2, 11-3 and against Jamie Cargill in the semis which finished 11-1, 11-2, 11-3.

It was more of the same in the finals with Kyle mixing up his shots and keeping calm during his 11-2, 11-8, 11-5 victory against Oliver Hunter. Oliver saved his best for the second game with an impressive trick shot between the legs to take the game to 2-3 and a great boast to bring it to 7-8 halfway through. But Kyle showed his class to close out the game with some deft drop shots before taking the last game 11-5. Kyle showed great control and patience throughout.

Top seed Lucy Murchie from Crieff was unbeaten on her run to the girls U19 title, beating her close friend and rival Beth Moglia 11-7, 3-11, 11-9, 11-6 in an entertaining final. In the first game, Lucy was using her short game to good effect, drawing Beth out of position, and finishing with some clever back wall boasts.  However, Beth found her game in the second, holding her position nicely and controlled the points to ease to a 11-3 win.  Lucy showed her class in the final two games, showing great patience to pick her winners when the opportunity arose, before closing out the third with a great serve winner. Beth fought hard again in the final game, but a few unforced errors and some aggressive squash from Lucy saw her bring home the title.

Lucy said: “The final was a good game. I was pleased with my performance. I’ve been playing Beth since we were 12, she’s a good friend. It’s been two years since the last nationals, so it took a while to get back into the swing of things. Also, there’s been quite a bit of change in my life moving down to Edinburgh uni, but it’s been a positive move. I’ve had lots of support from the university and Scottish Squash to help with the transition, it’s been good. Next up I hope to get selected for the Europeans and do well at some of the senior gold tournaments.”

The final of the Boys U19 was a fitting end to a very successful Scottish Junior Championships. It was a high-class match between the number 1 seed and Junior U17 champion Kyle Penman and his rival Rory Richmond. There was nothing in it in the first two games, with both players taking then relinquishing the lead at regular intervals. It was a gripping contest with both players showing top class technique – it was a battle of will more than anything else, with Kyle just edging the first game 11-9. Rory came back in the second, with some aggressive squash, finishing the game 9-11 with a great boast winner. But Kyle kept his composure and played some consistent, low risk shots to finally get some daylight between him and his opponent, winning the last two 11-5.

Kyle Penman said: “I played a lot of matches in the run up to the U19 final, I didn’t initially want to play both age groups but the opportunity came up and I’m glad I did. I knew it was going to be tough but my body felt good going into the games and once the adrenaline kicked in, I got into the flow and it turned out really well. In the U19 final it wasn’t so much about tactics you just see what happens on court in front of you, and whether you can perform to your best on the day. I’m really happy with the win.” 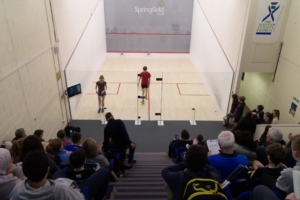 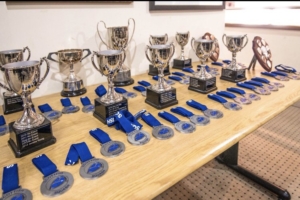 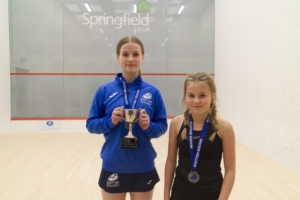 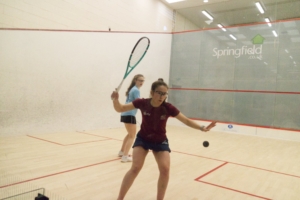 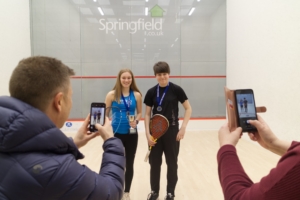 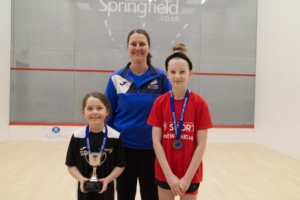