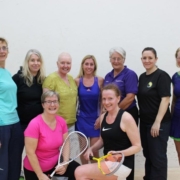 Andrew Spiers battled to a great win in the O40 category, beating the number one seed Blair McKenzie 13-11, 4-11, 2-11, 7-11 and Euan Allison 11-5, 8-11, 5-11, 5-11 in the top finals group. The number 2 seed Barry Masson won the second group beating Nicky Riley 3-0 before accepting a walkover against David McCormick, who had to withdraw. Meanwhile in the third group playoff, Malcolm Cameron came out on top.

The men’s O45 went to form with the number 1 seed Simon Boughton beating the number 2 seed Keith Simpson in a gripping final 12-10, 12-10, 11-6. Simon didn’t drop a game throughout his run to the final, beating Chris Turlik in the quarters 11-3, 11-6, 11-1 and the number four seed Blair McKenzie 12-10, 11-4, 11-4 in the semis. Despite this it was far from a walkover, with Simon conjuring tremendous stamina and mental fortitude to battle through consecutive tough games to maintain his 100% record.

There were eight competitors in the O50 draw which was won by the number 1 seed Angus Woodward who beat Douglas Emery 11-8, 11-9, 11-5 in a hard-fought final. Both finalists enjoyed 3-0 victories along the way, including wins against Iain Clark and Chris Turlik for Angus and two solid victories against Donald Durrand and John Kynoch for Douglas.

The number 2 seed Bryan Jackson won the men’s O65 with 3-0 victories over Trevor Mackie and Robert Thomson, before a titanic struggle with the winner of the other draw and number one seed George Stewart 6-11, 4-11, 11-9, 11-4, 11-9. George lost only one of his six games on the way to the final, but despite winning the opening two games of the final, couldn’t quite maintain his stamina and form for the final three.

Eight players competed for top spot in the men’s O70. Ian Ross won the draw without dropping a game, beating Brian Duffy, Walter McAllister and the number 2 seed Alex Sinclair along the way. The match of the draw was between Alex Allan and Phil Leek which finished 1-8, 11-5, 2-11, 0-11, 0-11. After winning the first two 11-8, 11-5, Phil came back strong in the third 2-11. Alex was clearly struggling with an injury at this point but carried on finishing the five game match.

The men’s O75 draw witnessed a great win for Andy Duff who went into the draw as the lowest seeded player. But it was a tough road to the title, with Andy winning 9 out of 13 games, including a five-game classic against the second seed Bernard Starkey. After dropping the first two game 11-6, 11-9, Andy came back in the third 6-11, and battled through the fourth 10-12 to take the match to a decider. He won the last game 7-11.

There was  one draw in the women’s game – the O55 –  the quality of squash and competitiveness on display was top drawer. Many of the games in the O55 were keenly contested, including four five game classics. Pauline Douglas was the standout player, winning all three of her games in three against Julia Horsburgh, Helen Cordiner and Bernie Beattie.

The match of the draw was a five-game thriller between Helen Cordiner and Bernie Beattie on court 6. After Helen took a commanding 2-0 lead, including an epic tussle in the second 15-13, Bernie fought back winning the third 9-11 and fourth 7-11, before Helen found another gear and closed out the game 11-3.