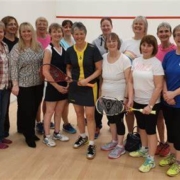 After some time on the side-lines due to recent Covid restrictions, the much-anticipated Scottish Masters National Championships returns to the squash calendar this weekend, taking place between 11-13th March at the Grange Sports Club in Edinburgh.

The tournament is open to all players over the age of 35, split into three women’s age categories (O35, O40, O60) and nine male categories (O35 to O70). The competition will run as a knockout draw system with plate competitions or round robin draws dependant on entry numbers. Over 80 players are expected to compete over the three days.

The tournament comes hot on the heels of the Grampian Regional Masters at the Aberdeen Squash and Racketball Club, which is a useful a guide to the players on form and who to watch out for. Ross McHoul (O35), Andrew Spiers (O40), Simon Boughton (045), Angus Woodward (O50), Billy Gregor (O55), Chris Holt (O60), Bryan Jackson (O65), Ian Ross (O70) and Andy Duff (O75) all won their respective age groups and are expected to compete at the weekend to extend their winning form.

Ian Ross, winner of the O70 category said: “‘It was great to catch up with ‘old’ friends whom I had not seen for a couple of years at the Grampian Masters.

The Scottish Nationals are always special and this year they should be very competitive with most of the Scottish players having only 2 tournaments to secure selections for the Scotland Home International teams.

I have been fortunate to play in some of the 2021/22 events in England and played well and looking forward to the Nationals.”

Meanwhile in the women’s O55 draw Pauline Douglas toped the bill and is expected to compete for the national title.

For more information about the Scottish Masters National Championships, including draws and results, please visit here