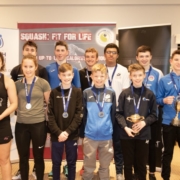 After a two-year hiatus, one of the highlights of the Junior circuit is up next, the much anticipated and keenly contested Scottish Junior National Championships, which takes place between the 25th-27th February at the Oriam, Scotland’s Sports Performance Centre at Edinburgh’s Heriot Watt University.

The competition runs under the popular Monrad draw system and round robins which gives every competitor the chance to play through to a final finishing position. The tournament is open to all players under the age of 19. Over 80 juniors will battle it out under 10 categories throughout the weekend, with separate draws for boys and girls at U11, U13, U15, U17 and U19 levels.

The last tournament was played back in 2020 at the Aberdeen Squash and Racketball Club with star players such as Inverness’s Alasdair Prott, John Meehan, Edith Mackenzie and Lucy Murchie topping the bill. This year’s competition sees some of the players of the future making their names on the national junior circuit.

Keep an eye out for five times junior national champion Lucy Murchie from Perth, who will be competing in the women’s U19 draw. Lucy broke into the senior tour in 2021 and is currently ranked 377 on the PSA World Tour (as of 21.02.22).

She has also recently competed in the British Junior U19 National Championships in Birmingham in January, narrowly losing out to England’s Asia Harris after a battling second round match.:

Lucy said: “I’m really looking forward to this weekend! Training has been going well since I’ve moved down to Edinburgh University last September and it’s been good to be more involved in the training at Heriot Watt with Scottish Squash.

I’m grateful for the support that Edinburgh University has given me since I made the move. This is my last junior nationals so it would be good to end on a high. I managed to win the last nationals in 2020 just before Covid hit, so I’d be pleased if I could match that result.

Hopefully I can get some other good results in senior tournaments throughout the rest of the season too.”

Meanwhile, in the boys U13’s category, defending champion Zack Paton from Nairn will be looking to repeat his success in 2020, after he beat Murdo Mackenzie to win the final of the Scottish Junior National Championships two years ago.

He also reached the final of the U11’s in 2019, which was won by Watsonian’s John Green, proving Zack has a strong record at these championships.

He also reached the third round of the British National Championships in Birmingham last month, narrowly missing out on a quarter final spot, after being beaten by England’s Ali Khalil.

Zack said: “Getting back playing after the first lockdown let me get straight back into competition mode.

The best experience since winning the boys under 11 Scottish National Championships in 2020, was going to the British Nationals in Birmingham last month. A 3rd round draw against the no3/4 seed Ali Khalil was the highlight, narrowly losing out 17-15 in the fifth. We both went on to lose our next rounds, possibly because of our extensive efforts in the morning match.

Going into the Scottish Nationals this weekend I can’t be complacent. Jamie Pearman, Cailean McAlpine and others are playing well. I’m keen to concentrate on my own game and take it one match at a time.

After the Scottish Juniors I plan to compete in the Surrey Gold in March. This is my opportunity to play some of the top boys in England and get a measure of where I am and where I need to improve.

I’m also looking forward next season to the full tournament calendar opening up after all the lockdown restrictions. Welsh, Irish, British and of course the Scottish are all Opens I’m looking forward to competing in.”

For more information about the Scottish Junior National Championships, including results and draws, please visit here