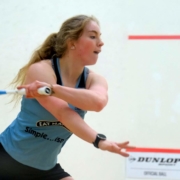 It’s been a lockdown of two halves for Perth squash player Katriona Allen.

After finishing third at the Sterling Trucks Scottish Nationals in March, she took advantage of the enforced shutdown to initially focus all her energies into completing her degree in Applied Sport Science.

Up to the end of May Katriona was putting the finishing touches to her dissertation and undergoing final year exams at the University of Edinburgh, which were moved online.

The decision paid off handsomely. Not only did she return to off-court squash training with renewed vigour in June but she has since graduated with a First Class honours degree.

“I made the decision that if I was going to take a proper break from training, the start of lockdown would be the time to do it,” she says.

“University was getting stressful and obviously the pandemic didn’t help because things at uni changed so much.

“But my studies gave me a routine and structure to my day which I liked and putting all my efforts into that has paid off.

“Since finishing my focus has been back fully on training.

“I’m definitely now going to give squash a real go professionally and because I’ve just graduated I might look to work part-time to help fund what’s really a dream job – travelling the world and competing in the sport I love.”

Despite the natural frustrations of being unable to jump on a squash court for so long, she recently took to playing another racquet sport, Padel, at Edinburgh Sports Club to help with her movement and hand-eye coordination.

And like many players during this time, the 22-year-old has found virtual squash training really beneficial.

She continued: “I’ve done tactical analysis via Zoom, watching matches back with Paul Bell (Scottish Squash Director of Squash) and discussing areas I can improve.

“And I’ve been doing plenty of work with sports psychologist Jeff Webster on visualisation, imagining what I would do during any given point in a match.

“That’s something I just started over this period which I loved and will continue to do when back competing.

“Of course it’s been frustrating not being on court but it’s about being patient and understanding that I will eventually get back to the level I was at pre-COVID.”

Scotland’s number four female was on the rise last season following a busy 2019 which saw her compete across the globe.

Summer 2019 saw her compete in France, Australia – where she played four PSA events – and India.

She added: “That was a brilliant experience, challenging at times because it really took me out my comfort zone.

“I learned so much and just being able to win when you don’t have all these familiar things around you like a coach was really important.

“I always remember Greg Lobban saying to me, training is great but you learn the most when on tour competing.

“He’s also done the Australian circuit and if I’m going to make a success of being a professional, I need to learn to win by myself.”