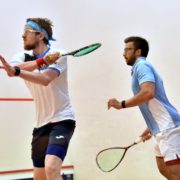 The Scotland internationalist is one of three Scots to receive wildcards for the event taking place from April 3-7.

He is joined by Rory Stewart in the men’s draw with Katriona Allen securing a wildcard into the women’s draw.

Teenager Lucy Murchie, Carrie Hallam and Fergus Richards will compete as invitees with other Scots in the draws including Alison Thomson and Georgia Adderley as well as nine-time National champion Alan Clyne who is men’s top seed.

Leiper, who has just returned to court following six weeks on the sidelines through injury, said: “I’m really pleased and grateful to receive a wildcard.

“We play all over Europe so it will be brilliant to compete in a big PSA event in Scotland.

“I got back on court recently after an ankle injury so now getting the news of the wildcard for the Springfield Scottish Squash Open gives me extra motivation to be fully fit for the event.

“I’ll be raring to go and I cannot wait.”

He continued: “The last time the Scottish Open was staged was 18 years ago in Perth which seems such a long time ago.

“Playing in front of a home crowd will hopefully give all the Scots competing a boost and my parents will be looking to come down from Aberdeen to watch.

“It’s going to be a great tournament and to have Springfield Properties as sponsor and seeing them invest in some of our younger players as well is fantastic.

“You can feel they are really invested in the sport.”

Leiper has been drawn against Jordan’s Mohammad Alsarraj in round one of the Springfield Scottish Squash Open but will return to competitive action this weekend (Saturday, March 16- Sunday, March 17) at the Scottish Student Squash Championships, also being held at Oriam.

The 25-year-old is in his final year of a Business Management degree at Edinburgh’s Queen Margaret University but is keen to fully concentrate on his squash once his final exam is completed in May.

He added: “I’ve been involved in squash for nearly 15 years and I’m keen to remain within the Scottish Squash Performance Programme after University.

“It’s been a great four years at Queen Margaret University but once I’m finished I’ll look to set new squash goals and I’m considering heading to Australia in August to compete.

“For now I’m focused on the Scottish Student Squash Championships and I’m looking forward to getting back out there competing.”

For more information on the 2019 Springfield Scottish Squash Open, head to the event website here.

Scotland Junior Squads Selected for 5 Nations and European Championships
Scroll to top
This website uses cookies to improve your experience. We'll assume you're ok with this, but you can opt-out if you wish.Accept Reject Read More
Privacy & Cookies Policy
Necessary Always Enabled