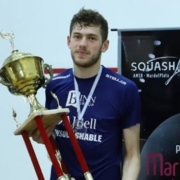 Scotland’s Rory Stewart (4) has won his first PSA Tour title after victory in the final of the $5.5k Mar del Plata PSA Open in Argentina on Saturday.

It begins a back-to-back four tournament stretch for Rory in South America and he takes on Columbia’s Ronald Palomino on Tuesday in the $11k Colon Squash Open, Colon, Argentina.

Speaking from Argentina, he said: “I’ve been to the latter stages of a PSA event in the past but always came up short.

“But after how I performed at the Europeans I knew I was playing well enough to win a PSA event soon.

“The first two games against Victor Crouin (at the Europeans) were probably the best two games I’ve played in my life so I went to Argentina with confidence. It’s a great opportunity to gets some wins and push my ranking up.”

He continued: “This year has been a bit of turning point in the way I’ve approached training and the game altogether.

“I’ve done a lot of work with my coach Paul Bell and I’ve made a few changes off court which will hopefully benefit me on the court. Things are starting to come together.

“Because of this fresh approach I felt confident throughout the tournament and when it came to the latter stages here in Mar del Plata I knew I had put the work in to get the outcome I wanted.”