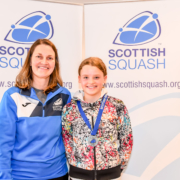 Lucy Murchie secured her first ever under-19 Scottish Junior National title on Sunday after a thrilling comeback win over Beth Moglia at Aberdeen Squash & Racketball Club.

The 16-year-old came into this year’s tournament full of confidence having performed superbly against top 100 PSA player Sanne Veldkamp at the ESC Open last week, losing in four tight games 4-11, 11-9, 7-11, 9-11.

She went unbeaten in both the under-17 and under-19 events in Aberdeen to seal two gold medals – taking her overall tally of junior national titles to five.

The under-19s final on showcourt seven was a great spectacle with Beth coming out the traps quickly and racing into a two game lead.

She said: “In the first two games I was getting outplayed, Beth was playing so well. Her length was good and she hardly made a mistake.

“I got back into both games but left myself too much to do. After that I stayed relaxed and tried to keep my shots accurate and not be too cute with them.

“The third and fourth games were much better for me and I was just glad to get over the line in the fifth because I felt it could have gone either way.”

She continued: “It feels good to follow behind Georgia Adderley in winning the under-19 event.

“Georgia is such a good player to look up to and is already in the world’s top 100.

“Playing in the ESC Open last week was great for me and I feel competing in these senior tournaments helps raise the standard of my squash.”

In her first season competing at under-15 level Robyn Mcalpine won her second ever national title.

Last year she won the GU13 event and is now part of a new crop of very talented Scottish GU15 players including Rowan Niven, Anna Halliday and Louisa Kaven who all made the semi-finals in Aberdeen.

She said: “To have won in my first year at under-15s is great.

“I had to focus all the way through the final because Anna is a really tough competitor.

“I was pleased with my concentration and my length and beating Rowan and Anna in the same tournament is something I’m very happy about because they are good players.”

The 13-year-old added: “Next for me is the Five Nations and European team events if selected which are always really enjoyable to play in.”

She won all four of her matches without dropping a game to land the title, beating silver medalist Ellen Phillips 11-2, 11-6, 11-7.

Another girl to go unbeaten whilst not dropping a game was Elisa Gibson in the GU11 event.

She got the better of Alice Redding, Phoebe Hamilton and Karma Khalil to win gold in the round-robin event.

Alice sealed a silver medal whilst Phoebe went home with a well-earned bronze.