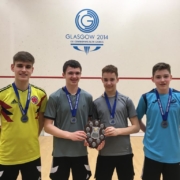 It was double delight for Beth Moglia as she secured two titles at the 2019 Scottish Junior Doubles National Championships held on Sunday, December 15.

In the mixed doubles, she teamed up with Steven Hill to seal her second title as Robyn McAlpine won another silver medal alongside Arun Pathal. Peter Macari and Edith Mackenzie claimed bronze.

Together with partner Kyle Penman, Arun went one better in the boys event going unbeaten to secure a gold medal with cousins Finlay and Connor Scott heading home with silver and Peter Macari and Steven Hill bronze.

For Edinburgh Sports Club’s (ESC) Arun Pathal it was his first ever national title.

The 16-year-old said: “It was a good day, a fun competition to play in and great to get my first Scottish title.

“Kyle and I played pretty well and I’ll be looking to enter again next year because it was so enjoyable.

“Kyle is great to play with, he’s younger than me and already a really talented player, a real upcoming player who has a bright future.”

He continued: “I don’t play doubles much but always try to when I get the chance.

“It’s slightly different to singles and brings in different aspects to your game which is a real benefit.”

Next up for Arun and the rest of Scotland’s juniors is the 2019 JC Lindsay Scottish Junior Open which takes place in Edinburgh from Saturday, December 28 to Monday, December 30.

Arun added: “I was injured at the start of the season but I’m on my way back to full fitness and hopefully I should be in good shape come the Scottish Junior Open.

“Getting the chance to play against players from all over the world is such a good opportunity and there’s always a strong entry at under-17 level.

“I’ll work hard on my fitness beforehand and get plenty of court time so I’m technically ready for it.”