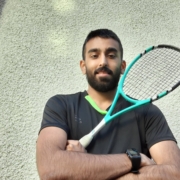 Giffnock’s James Singh worked as an IT specialist but when the opportunity arose to switch career and become a full-time squash coach, he didn’t hesitate to make the transition.

James was a junior player at Giffnock Tennis Squash & Hockey Club and credits his passion for the sport to then club coaches Billy Stevely and Stuart George.

He played both tennis and squash as a teenager before choosing the latter as his sport of choice.

Now 25, James remains a regular performer on the Scottish squash circuit but dedicates most of his time to coaching at Giffnock having been mentored by Stuart George before the Scotland internationalist headed stateside to take up a coaching position at Amherst College, Massachusetts.

“What really got me hooked on squash were the coaching sessions put on at Giffnock,” James says.

“As a junior I wasn’t at a level to play in the big events but I really enjoyed training.

“Stuart (George) then pushed me on to play more in the seniors and that’s when I dedicated more time to squash.

“What he focused on was getting a group of young players together and making training a social occasion. It’s something I look to replicate.

“As young players we were all very close and squash was our thing which we enjoyed playing, having fun and a good laugh.

“That’s what sold it for me as well as the nature of the sport. It’s fast-paced, dynamic and doesn’t take much to get a rally started before you quickly move straight on to the next point.”

He continued: “When Stuart made the decision to move to the USA he asked me to help with coaching at Giffnock.

“I enjoyed it and went on to do my Level One coaching so he could give me more responsibility.

“He then helped me transition into the head coach role at Giffnock, mentoring me the whole time which I am very grateful for.”

After a period as interim coach James became Giffnock’s full-time head coach in 2018.

Swapping his IT desk job for a coaching role was “an easy decision,” he says.

He manages Beginners, Development, Senior and Elite squads at Giffnock and was encouraged by the positive uptake in playing numbers before the coronavirus struck.

James, who’s completed his Level Two training, has remained in touch with as many of the players as possible during this time, particularly the youngsters who he senses are desperate to get back on court.

He’s also taken the opportunity to participate in Scottish Squash’s online webinars for coaches whilst getting creative himself by pushing out some online training videos.

“I’ve been checking-in with the players, making sure they are keeping on top of their fitness,” he said.

“I’m training at a running track with some of the senior players and encouraging the youngsters to come along as well. It’s important they see some familiar faces again and experience the social side of the sport.

“The webinars have been invaluable over this period. I’m still learning and starting my coaching journey and listening to how other more experienced coaches go about things has been great.

“My ambition is to eventually leave a legacy behind at Giffnock by developing a Senior Elite Academy for players who maybe can’t make it through to Oriam in Edinburgh all the time.”

To get in touch with James about his coaching programmes and plans email: squash@giffnock-ltc.co.uk or call James on 0744 6212 977.

Click here to read about the club’s inspirational Giffnock Community Outreach Project, designed to help the local community during the pandemic.