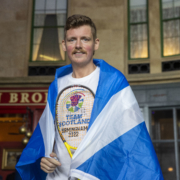 Despite his position as Scotland’s number one ranked player, being selected for the Commonwealth Games still retains the same sense of excitement for Greg Lobban. This will be Greg’s third Commonwealth Games having represented Scotland in Glasgow in 2014 and Queensland Australia in 2018.

Greg has had a glittering singles and doubles career, including reaching a career high of world 21 in 2019 and winning eight PSA World Tour titles including the Geneva Open in 2014 and the New Zealand International Classic in 2017. After a Covid disrupted 18 months, Greg’s form has returned this year with a string of great results, including a silver and bronze at the World Doubles in Glasgow and winning the Cannon Kirk Irish Squash Open in April, beating his friend and rival Alan Clyne in a nail biting final. He also reached the quarter final of the Squash on Fire Open in April and British National Championships in June, before winning the Scottish National Title earlier in the month.

Greg also brings with him a wealth of doubles success and experience including winning Gold at the World Doubles in Darwin in 2016, Silver in Manchester in 2017 and more recently, winning silver in Glasgow with Rory Stewart and bronze in the mixed doubles with Lisa Aitken.

Greg said: “It’s great to be selected. I’m really looking forward to being part of the team again.  To represent Scotland at the Commonwealth Games is the pinnacle for squash players. The games only come round once in four years and so to be picked as part of the collective team Scotland is special. These games are unlike any other event, so just to be part of something with all the best athletes in Scotland is a privilege.

Looking back at my career, competing at a Commonwealth Games in Glasgow was incredible – the noise and buzz was unbelievable. It was the best two weeks of my sporting career, but I’m sure Birmingham will be very special in its own way.

Naturally I’ll be pushing hard for a medal in the singles and I’ve got really exciting partners in the doubles with Lisa and Rory. I enjoy playing with them and we have already enjoyed success at the World Doubles. We’re going in confident, knowing we can do some damage.

My approach to these games won’t be too different from other major events – I’m 29 now so I have a lot of experience under my belt, I know how to prepare and how I should approach it from physical and mental standpoint. I work closely with my coaches in Australia and in Scotland. Myself, Rory and Lisa will be spending a lot of time discussing, analysing matches for the doubles to ensure we maximise our performance on the day. I can’t wait.”

National coach Paul Bell reveals his secrets for preparing the team for a successful...
Scroll to top
This website uses cookies to improve your experience. We'll assume you're ok with this, but you can opt-out if you wish.Accept Reject Read More
Privacy & Cookies Policy