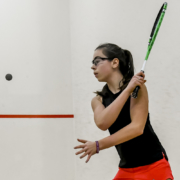 The 14-year-old is in the women’s draw alongside six-time PSA Tour winner Lisa Aitken (WR40) and other tour professionals including top 100 player Georgia Adderley, with the event taking place at Edinburgh Sports Club between Friday, March 13 and Sunday, March 15.

Rowan believes rubbing shoulders with Scotland’s professional players can only benefit her as she continues to make impressive strides on the junior circuit. Other juniors in the women’s draw include Anna Halliday, Lucy Murchie and Robyn Mcalpine.

“You obviously want to win but the main thing is to take in the experience of playing in such a big event and learn off the professional players.

“That’s the main reason you enter as a junior. There’s not too much pressure and you can just give it your all against the senior players.

“Even when you are not on court, you get the chance to watch how the professionals go about things and get little tips which can hopefully help your game.

“I look up to all our senior players and seeing Georgia (Adderley) transitioning out of the juniors and now competing on the PSA Tour is brilliant. It’s great to see her progress already.”

She currently sits eighth in the Girls Under-15 European rankings and is over in Hamburg this weekend competing at the German Junior Open alongside compatriots Anna Halliday and Alasdair Prott.

“I really enjoy the European events and have managed to do well,” she said.

“You are up against different styles of player from different countries which helps bring on your own game and it’s given me more confidence when returning to play back on the Scottish circuit.

“There’s a number of good Scots around the same age as me who play regularly at the European events.

“Anna and I are the same age, Robyn (Mcalpine) is slightly younger and improving really quickly and Louise Kaven is another who gave both Anna and myself a scare at the Scottish Junior Nationals. I think that competition helps make us all better players.”

Rowan credits former world top ten player and resident Bridge of Allan coach Jane Martin for the improvements to her game in recent months with the pair currently putting time into the mental side of her game ahead of the Sterling Trucks National Championships.

Rowan added: “I have been working with her since I took up squash and she’s been very supportive of me.

“At the moment I am focusing on the mental side of things, trying to keep my mental strength up throughout a match.

“I feel it’s just as important as the physical side of my game.”

The Sterling Trucks Scottish National Championships 2020 will be held at Edinburgh Sports Club between Friday, March 13 and Sunday, March 15.

The Men’s and Women’s Championships are open to all players who are eligible to represent Scotland. To enter, click here.