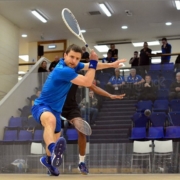 Rooney gatecrashes the semis as Clyne and Spanish trio advance.

It was point for point for most of the first two games, both featuring tough hard-hitting rallies with Jasmine taking the first and Lucy levelling, each pulling away from 7-all. In the next two games Lucy’s precision started to force Jazz to work harder, bringing more errors as Lucy took the final two games to complete a 8-11, 11-9, 11-6, 11-7 win in 43 minutes.

“I haven’t been top seed in a PSA event before so that adds a bit of pressure.

“Jazz and I have played through the juniors, played a lot of finals. It’s always tough and I lost 3-2 last time we played so I’m glad to be able to win this one.”

The first men’s match saw Spanish fourth seed Bernat Jaume (pronounced ‘Jowma’) ease through against Canada’s David Baillargeon. Dominant in the first game, Jaume let a second game lead slip but then from 8-all pulled away again, and was equally impressive as he took a 10-3 lead in the third, finishing the match 11-4, 11-8, 11-6 in just over half an hour.“I was happy with how I played there, I felt quite good and my shots were working well.

“It’s nice to have a few Spanish here for a bit of support and advice.

“The trick is to be able to carry on playing well in the next round. I don’t mind who I play in the semis, I just hope they play for two hours later on!”

The second women’s match featured Scottish junior Georgia Adderley, the only unseeded player left, against Spanish 8th seed Cristina Gomez. Cristina got off to a great start, leading 6-0 in the first, and for the most part continued to be in charge for the next three games.

Georgia wasn’t able to recapture her form of yesterday and was getting increasingly frustrated as the error count piled up. Cristina continued to play well and won 11-3, 11-7, 11-4 in just under half an hour to reach her biggest PSA semifinal to date.

“It’s always tough playing Georgia, she fights for everything and we had a real tough match last year. I knew what to expect and that helped me today, so I’m very happy to get through in three.”

Lopez got the better of a tough opening game then raced away from the middle of the second to double his advantage. Frost fought back well to take the third but it was all Lopez in the fourth as he completed the 11-9, 11-4, 5-11, 11-2 win.

“It was a good match, Kristian played well but I was happy with how I finished it.

“Now to get ready for an all-Spanish semi-final !”

The second session opened with see-saw five-setter between Melissa Alves and Ooi Ka Yan. The diminutive Malaysian took a close opening game but when the second seeded France stormed back to take the next two it looked all over.

“That was a tough match, she fought all the way.

Then came the match the crowd had been waiting for as top seeded Scot Alan Clyne took on young Frenchman Sebastein Bonmalais. Clyne took the first two games 11-4, 11-1 but that scoreline did scant justice to the efforts of Bonmalais, and the effort Clyne was making to win the points.

The third seemed a truer reflection and it went point for point, Bonmalais getting game balls at 10-9 and 11-10 but it was Clyne who finally sealed it 13-11 on his second match ball after 45 minutes.

“That was tough, Seb put me under a lot of pressure, especially in the third, and almost took it.

“Happy to finish that in three, it might be important later on …”

The final women’s quarter-final went to seeding as the previous three had done, but England’s Kace Bartley, like Clyne, had to work hard for her straight games win over Hull based Faiza Zafar of Pakistan.

Faiza led for most of the first only for Kace to squeeze home 12-10, and the fourth seed pulled away from 7-all in the second to double her lead. Kace seemed to find her range better in the third and completed the 12-10, 11-7, 11-6 win in exactly half an hour.

“We’d never played before and it was tough, she has a lot of talent.

“It was hard to cope with the fast pace she plays at, I had to work hard to slow it down and happy to get through in three.”

The final match of the was – as yesterday – the longest as Patrick Rooney turned in a stunning performance to oust third seeded Frenchman Victor Crouin in four furious games. The pair went at it hammer and tong in the first two, determined, frantic and skillful rally after rally.

Rooney squeezed home 11-9 in the first but Crouin levelling 16-14 after both had plenty of game ball opportunities. It was the Yorkshireman who took control in the last two though, winning both 11-5 to win the match in just short of the hour.

“I thought I played well yesterday, and again today in a very tough match.

“I lost 3-0 last time I played Victor so really pleased to be able to turn it round and delighted to make the semis.”