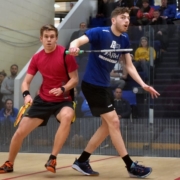 Rory Stewart will make his debut at the Commonwealth Games and is relishing the opportunity to pull on the Scotland colours at Birmingham 2022. Rory has enjoyed a strong year in 2022, breaking into the top 75 for the first time and enjoying a string of great results including lifting the Liverpool Cricket Club Open in March and reaching the final of the Bermuda Open in May.

Stewart made his debut on Tour in 2016, and in 2017 reached the quarter finals of the Austrian Open, before making it into the semis of the Open International d’Angers later that year.

2018 saw the Scot reach the last four of both the Vitesse Stortford Classic and the Austrian Open, before winning his first PSA tour title in 2019 at the Mar Del Plata Open, where he defeated Edgar Ramirez Bautista in straight games in the final.

He also reached the semis of the Paraguay Open, along with a last four appearance at the MTC Squash Russian Open.

After appearing just twice on Tour in 2020, Stewart broke through in 2021, winning four times on the Challenger Tour and moving inside the top 100 in the World Rankings. His first win came at the City of Peterborough Squash & Racketball Club Open, before taking another victory that month at the Carlisle Squash Club Open.

Those results pushed Rory inside the top 100 for the first time, before winning on home soil for the first time at the Scottish Circuit Event. He also reached the final of the Global Pontefract Men’s Challenger in that spell.

Later in the year, Stewart claimed his fifth Tour title, and the biggest to date, as he beat Sam Todd in the final of the Challenger 10 level Novum Energy Texas Open. He then ended the year with a semi-final appearance at the Sportwerk Men’s Open in Hamburg, Germany,

The 25-year-old has also made a big impact in the doubles game, impressing greatly at the WSF World Doubles Squash Championships in Glasgow, where he joined forces with Greg Lobban to win a silver medal.

Rory said: “I’m just happy and relieved I made it. I was close to going to the Gold Coast Games in Australia, but with fewer places on offer, it was a challenge getting picked. It’s great we have six places now giving a wider number of players the chance to compete on the world stage. I think it’s only fair this group of players get their chance – we’ve played some great squash and got some good results this year.

Getting to the Commonwealth Games is a massive achievement for a squash player. Squash isn’t in the Olympics so this is our chance to show the world what we do. I’m so proud, it means so much to me and my family. I thought off the back of the World Doubles final I had a good chance – that was the first time I’ve represented Scotland at a major doubles tournament. I’m thankful to Paul Bell for taking a bit of a punt and choosing me over the more seasoned doubles partnership of Alan and Greg. I think it paid off and I want to reward him and the team with success at the Games in Birmingham.

I’d just like to thank my sponsors, coaches and family for all their support – it’s a cliché but I really wouldn’t be here if it wasn’t for them. I can’t wait to see what we can do as a team at these games.”